BROOKLYN, N.Y., Feb. 2, 2017 (SEND2PRESS NEWSWIRE) — Pratt Institute — The Semi-finals of the 43rd annual Colgate Women’s Games featured athletes in every age division continuing to set or retain nationally leading scores, and several competitors continuing to achieve their own personal records, as the field narrows to some 230 athletes who will compete in the finals. 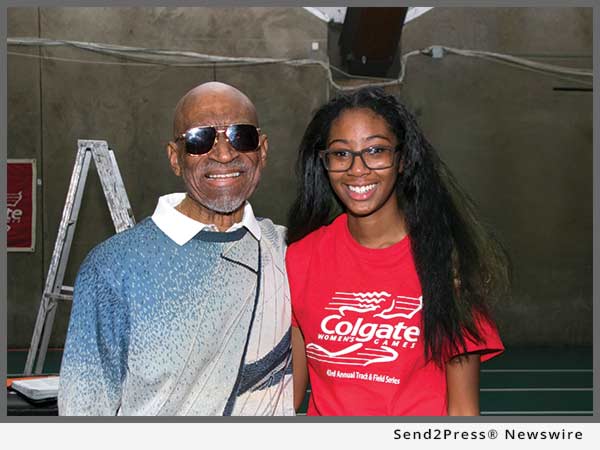 Meet Director Cheryl Toussaint said, “By the Semi-finals, leaders are reaching their season’s peak performances and many on Saturday achieved new personal bests. Colgate Women’s Games’ founder Fred Thompson, who has touched the lives of countless young women over more than fifty years, was on hand to greet many emerging champions and some of his successful proteges, including High Jump Champion and Colgate Games record holder My’Khiyah Williams after she wowed the crowd clearing 5-feet 8-inches in the High School High Jump.”

In the Mid School division, Alina Laforest of Chester, PA, Lauren Heskin of Floral Park, NY, and Brianna Thomas of Chestnut Ridge, NY all achieved new personal best scores. Alinia won the 800 meters in 2:18.431; Lauren, who finished the season undefeated, won the 1500 meters in 4:46.412; and Brianna, also undefeated won the shot put with a toss of 9.81 meters. Lauren Princz of Egg Harbor Township, NJ remained undefeated after winning the 55 meters in 7.513; Tia Taylor of Egg Harbor City took first in the 55 meter-hurdles in 8.541; Brianna Brown of the Bronx won the 200 meters in 26.517; Alanni Cannon of Brooklyn finished the 400 meters in 1:00.508; and Jade Pope of Pennsauken, PA continued to clear 5’2” for the high jump win.

From Massachusetts to Georgia some of the youngest finalists travelled the furthest each week, including undefeated Elementary A high jump champion Savauni Banks of Belmont, MA who cleared 3’8″ this season and Alyssa Duant of Boston in 6th place in the same event. In the Elementary B division Ronniah Wright of Stone Mountain, GA leads the 55 meters, and Avery Hart from Brookline, MA heads to the finals in 4th place in the high jump. In the Mid School division, Peyton Rollins of Medford, MA is in second place in the 55 meter hurdles; and Kylee Bernard of Cambridge, MA also heads to the finals in sixth place in the 400 meters.

Toussaint said, “We applaud the hundreds of families, coaches and friends who travelled great distances for each meet, and we are privileged to be a part of your awesome support for these special young athletes!”

The finals of the 43rd annual Colgate Women’s Games will take place at the New Balance Track and Field Center at the Armory, NYC on Saturday, February 18, 2017, where trophies and educational grants-in-aid from Colgate-Palmolive Company are awarded to top place finishers in each age/grade division. The 2016 Olympic Games added another six athletes for a total of 26 Olympians who have developed their talents through more than four decades of the Colgate Women’s Games.

Tickets to the finals are free by request to colgategamestix@gmail.com. Coaches, recruiters, athletes and fans can follow scores at http://www.Colgategames.com/.

View More Track and Field News
Meet Director Cheryl Toussaint said, "By the Semi-finals, leaders are reaching their season's peak performances and many on Saturday achieved new personal bests. Colgate Women's Games' founder Fred Thompson, who has touched the lives of countless young women over more than fifty years, was on hand to greet many emerging champions and some of his successful proteges."