BROOKLYN, N.Y., Dec. 21, 2016 (SEND2PRESS NEWSWIRE) — Returning champions and promising newcomers from Boston to Virginia in first grade through college and beyond competed this weekend at the opening preliminary meet of the Colgate Women’s Games, the nation’s largest female amateur indoor track and field series. 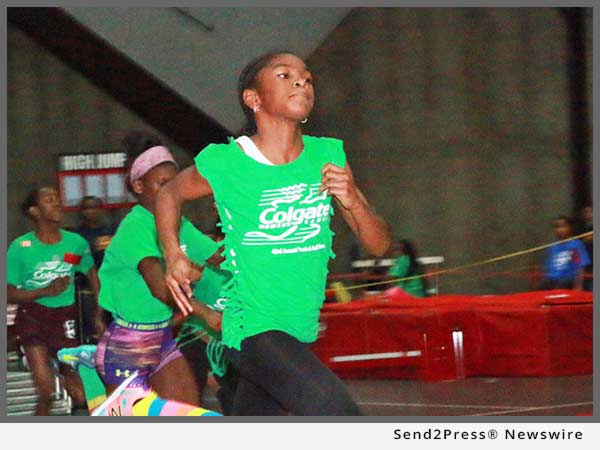 Meet Director Cheryl Toussaint said, “Avery is the only competitor to hold three Colgate Women’s Games concurrently. It’s really exciting when our younger participants excel because it inspires so many more to kids to choose athletics as a path to success. The Colgate Women’s Games help spotlight their achievements and we’re proud that athletes of all ages across the nation look to our stats and records as a benchmark in all our track and field events.”

In the High School division Friday evening, Dylann Core of Astor Collegiate Academy in the Bronx scored a double win against a tough field of veteran high school sprinters, crossing the tape in the 55M in 7.25 and the 200m in 26.08. Core’s victories are especially notable after placing 4th and 7th earlier this year at the AAU Invitational behind club teammates and returning high school champions in these fields. Another fast rising star, New Jersey’s Athing Mu of Trenton Central also scored a double win, placing first in the 400M (60.9) and the 800M (2:26.2). National champion My’Khiya Williams, who holds Colgate Women’s Games records in the Elementary B and Mid School high jump, cleared the bar at 5’4” for the win.

In the Mid School division on Saturday, returning champion Brianna Brown of Bronx Latin won both the 200m (25.91) and 400 Meters (60.22); faster times than high school leaders in these events. Brown, who holds two national age division USATF records, was awarded the Colgate Games’ trophy for “Outstanding Competitor at the Finals” last season. Now a 7th grader, she began competing in the Colgate Women’s Games as an Elementary A competitor and has placed first overall in every event each year since.

“This year women’s track and field has been in the spotlight from the 2016 Olympics in Rio where Team USA featured six athletes who participated in the Colgate Women’s Games. The Games have now produced 26 Olympians and hundreds of national age/grade division champions, an inspiration to the thousands of girls and young women of all ages and abilities that compete each year. While top talent often gets the buzz, the Colgate Games are very much about gaining experience and self-esteem and the importance of continuing education for all who participate,” Toussaint said.

Nation’s Fastest 8 year-old:
On Sunday in the Elementary A division, 8-year old track sensation Junior Olympic champion Damira Allen of Chester Charter School in Pennsylvania won the 400M in 1:10.05 and the 800M in 2:34.5. Allen set a record as a 7 year-old in the ESPN Games with a 400M time of 1:09.39; and another this year at the AAU Junior Olympics in August in Texas with an astonishing 1:05.89 performance. The Colgate Women’s Games division record stands at 1:05.91 set by Philadelphia’s Kenai Bey-English in 2015. Allen’s 800M 2.34.5 is her fastest time at any major meet yet, and less than 2 seconds off a 30 year-old Colgate Women’s Games record set in 1986 set by All American Jawauna McMullen.

Four preliminary meets and a semi-finals at Pratt Institute will determine who will compete at the finals at the New Balance Track and Field Center at The Armory, New York Saturday, February 18, 2017, where trophies and educational grants-in-aid from Colgate-Palmolive Company are awarded to top place finishers in each grade division.

(*NOTE: Hand-timed. The hand-timed race will join, not erase an electronic timed 7.40 record set in 2003 by Rayona Lynch.)

View More Sports and Activities News
Meet Director Cheryl Toussaint said, “Avery is the only competitor to hold three Colgate Women’s Games concurrently. It’s really exciting when our younger participants excel because it inspires so many more to kids to choose athletics as a path to success."

LEGAL NOTICE AND TERMS OF USE: The content of the above press release was provided by the “news source” Colgate Women's Games or authorized agency, who is solely responsible for its accuracy. Send2Press® is the originating wire service for this story and content is Copr. © Colgate Women's Games with newswire version Copr. © 2016 Send2Press (a service of Neotrope). All trademarks acknowledged. Information is believed accurate, as provided by news source or authorized agency, however is not guaranteed, and you assume all risk for use of any information found herein/hereupon.