NEW YORK, N.Y., March 2, 2015 (SEND2PRESS NEWSWIRE) — A series of market investigations by Thintri, Inc. (www.thintri.com) has revealed significant new opportunities in several emerging technologies. These studies have uncovered three technologies that are projected to undergo dramatic market growth through the decade, moving rapidly from very modest, or even non-existent, markets to billion-dollar levels within the next five to 10 years.

The opportunities are analyzed in Thintri’s Market Alerts, a series of shorter, concise market studies focusing on new or previously overlooked technologies that are poised to make a significant impact in the near future.

TV White Space:
Television White Space refers to the frequency bands residing between broadcast television channels that have been freed up by the move to digital television, and made available by the FCC for unlicensed use in telecommunications. The technology, which has already been proven in a number of deployments, comes at a time when conventional wireless networks are approaching saturation, when demand is growing at more than 100 percent per year. This bandwidth crunch results not only from burgeoning consumer smartphone use, but also new applications like the Internet of Things and Machine-to-Machine communications.

TV White Space can provide relief, with the potential to offer Exabytes per month of added capacity in this decade. It also offers potentially highly profitable solutions in bringing broadband wireless access to rural and underserved populations, as well as wide area and metropolitan networks.

Graphene-Based Lubricants:
Graphene, a two-dimensional array of carbon atoms, offers a number of fascinating properties. It is the thinnest material ever found, it’s hundreds of times stronger than steel and offers extraordinary electronic properties. Graphene offers the potential to remake entire industries, but none more so than lubricants. Graphene is chemically inert and offers high mechanical strength, and can be applied to nanoscale devices or macro-scale machinery, all with significant advantages over established lubricants.

Paper Electronics and Paper Batteries:
Paper electronics, the printing of electronic devices, circuits and displays on cheap, disposable paper substrates, is rapidly approaching commercialization and offers the promise of creating large, entirely new markets. Of course paper electronics will never duplicate silicon’s performance, but that’s not the point. While performance will be limited, costs will be so low that electronics and displays will find themselves in applications undreamt of until now. Roll-to-roll printing will print electronic circuits on paper substrates faster than an Olympic sprinter can run, enabling incredibly high volume production.

Paper electronics will bring intelligence to innumerable applications that today are strictly low tech. For example, ordinary packaging will incorporate displays running videos on product operation; small, disposable tabs will quickly diagnose disease in the patient’s home; business cards will update themselves or show a person’s present location; retail security will include technically sophisticated mechanisms that cost pennies; billboards and signage will be easily updated and include full-motion video; and many other applications will be made possible and extremely inexpensive.

The greatest revenue opportunity will be paper batteries and ultracapacitors. Paper has long been used in power capacitors, but can also be made into lightweight, robust and powerful batteries that can be rolled or folded into nearly any shape, able to accommodate the most constrained form factors, such as in cell phones. Paper ultracapacitors can efficiently deliver tremendous bursts of power, a necessity in some applications like electric vehicles, biometric ATM cards or small devices sending wireless signals. Markets for paper electronics and paper batteries will likely approach billion-dollar levels within 10 years.

Thintri’s Market Alerts highlight extraordinary opportunities for investment and revenue in fast-changing markets by technologies that are poised to revolutionize entire industries. More details can be found at http://www.thintri.com/.

About Thintri, Inc.
Founded in 1996, Thintri, Inc., is a full-service consulting firm, based in New York and directed by J. Scott Moore, Ph.D. 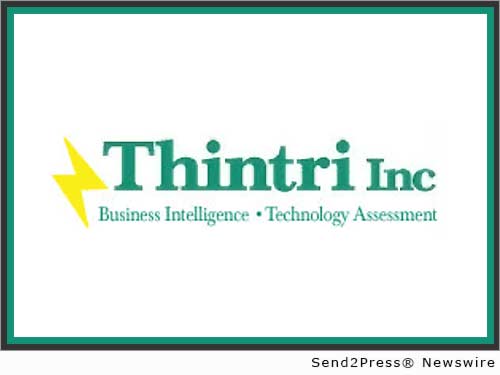 NEWS ARCHIVE NOTE: this archival news content, issued by the news source via Send2Press Newswire, was originally located in the Send2Press® 2004-2015 2.0 news platform and has been permanently converted/moved (and redirected) into our 3.0 platform. Also note the story “reads” counter (bottom of page) does not include any data prior to Oct. 30, 2016. This press release was originally published/issued: Mon, 02 Mar 2015 13:55:29 +0000

LEGAL NOTICE AND TERMS OF USE: The content of the above press release was provided by the “news source” Thintri, Inc. or authorized agency, who is solely responsible for its accuracy. Send2Press® is the originating wire service for this story and content is Copr. © Thintri, Inc. with newswire version Copr. © 2015 Send2Press (a service of Neotrope). All trademarks acknowledged. Information is believed accurate, as provided by news source or authorized agency, however is not guaranteed, and you assume all risk for use of any information found herein/hereupon.