"As a fan, I think I just felt compelled to depict two of Bill Cosby's creations at odds with each other, because Bill Cosby seems to be at odds with what I always thought Dr. Huxtable stood for," said artist Rodman Edwards.

HOLLYWOOD, Calif. and ST. PETERSBURG, Fla., Feb. 5, 2015 (SEND2PRESS NEWSWIRE) — A teenage artist’s protest against Bill Cosby for misrepresenting his TV characters and their messages is proposed as a nude statue of Cosby’s Dr. Cliff Huxtable from “The Cosby Show” to “replace” the busts of the legendary performer displayed in front of the Academy of Television Arts and Sciences Halls of Fame in North Hollywood and Orlando. The Dr. Huxtable sculpture depicted with a saddened Fat Albert, created by young sculptor Rodman Edwards, is being unveiled by Cory Allen Contemporary Art (CACA).

“Rodman captured Cosby’s real character,” said the artist’s spokesman Cory Allen. “I think this is a more appropriate statue than the one depicting America’s Dad at the TV Hall of Fame.”

“Hall of Fame statues should not be exempt from reevaluation. Sometimes they need to be removed or replaced,” said Cory Allen. “Joe Paterno’s statue was taken down following the 2011 Penn State sex abuse scandal. Maybe the TV Hall of Fame and Disney should take note,” added Allen, referring to Disney World, the Academy of Television Arts and Sciences east coast location.

“As a fan, I think I just felt compelled to depict two of Bill Cosby’s creations at odds with each other, because Bill Cosby seems to be at odds with what I always thought Dr. Huxtable stood for,” said artist Rodman Edwards.

This is Rodman Edwards’s first representation by CACA. Rodman, a freshman in high school, has shown his work at Mask Fest in Indianapolis and at Son of Monsterpalooza in Burbank, California, and has lent his large mask of Hillary Clinton to an anti-Keystone pipeline demonstration at a democratic fundraiser attended by Clinton in San Francisco.

“Fat Albert Cries for Dr. Huxtable – Proposal for TV Hall of Fame” will open to the public at CACA’s The Showroom, the world’s first public relations gallery, located in the Warehouse Arts District in St. Petersburg, Fla., on February 20, 2015. For more information, contact Cory Allen at 323-393-3115 or visit http://www.cacanet.com/. 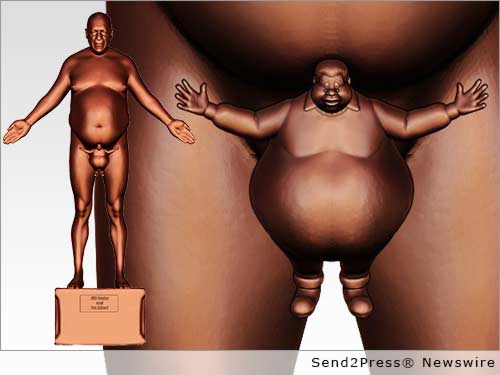 NEWS ARCHIVE NOTE: this archival news content, issued by the news source via Send2Press Newswire, was originally located in the Send2Press® 2004-2015 2.0 news platform and has been permanently converted/moved (and redirected) into our 3.0 platform. Also note the story “reads” counter (bottom of page) does not include any data prior to Oct. 30, 2016. This press release was originally published/issued: Thu, 05 Feb 2015 15:46:47 +0000

View More Entertainment News
"As a fan, I think I just felt compelled to depict two of Bill Cosby's creations at odds with each other, because Bill Cosby seems to be at odds with what I always thought Dr. Huxtable stood for," said artist Rodman Edwards.

LEGAL NOTICE AND TERMS OF USE: The content of the above press release was provided by the “news source” Cory Allen Contemporary Art or authorized agency, who is solely responsible for its accuracy. Send2Press® is the originating wire service for this story and content is Copr. © Cory Allen Contemporary Art with newswire version Copr. © 2015 Send2Press (a service of Neotrope). All trademarks acknowledged. Information is believed accurate, as provided by news source or authorized agency, however is not guaranteed, and you assume all risk for use of any information found herein/hereupon.