"Radiocarbon dating will never rule out the Shroud of Scientology's authenticity. It exists as a document of Tom Cruise's faith in Scientology - a photo negative of the radiance of his soul. It gives evidence for future generations that Tom Cruise not only belonged to Scientology, but saved it from obscurity," said Edwards.

ST. PETERSBURG, Fla., July 29, 2015 (SEND2PRESS NEWSWIRE) — A “nude shroud of Tom Cruise” will be unveiled as a tribute to the actor’s 25th anniversary with the Church of Scientology. The silver anniversary celebration reaffirming his commitment will take place at a “Pop-up Church of Scientology” near its Clearwater headquarters as part of a larger exhibit of the actor. Commissioned curator and artist Daniel Edwards assisted Cory Allen Contemporary Art with exhibition arrangements scheduled for August.

Like the famed Shroud of Turin, the “Shroud of Scientology” is rectangular, measuring approximately 14×3 feet. It features a silverish image of a naked Tom Cruise, front and back view, with immaculately groomed genitalia on display, and his hands over the Scientology cross placed on his chest. The two views are aligned along the mid-plane of the body with both views of the head nearly meeting at the middle of the cloth. The cloth is Poplin, a strong fabric, softly textured, flame and wrinkle-resistant with a beautiful draping quality, used since the 15th century.

Along with the shroud, the Church of Scientology Silver Anniversary Medal for Tom Cruise will be displayed, of which images are now being released. “The medal has not yet been presented to Tom Cruise,” said Allen.

“Radiocarbon dating will never rule out the Shroud of Scientology’s authenticity. It exists as a document of Tom Cruise’s faith in Scientology – a photo negative of the radiance of his soul. It gives evidence for future generations that Tom Cruise not only belonged to Scientology, but saved it from obscurity,” said Edwards.

Though the City of St. Petersburg has not issued a special use permit, plans are the temporary church location will remain for the duration of the exhibition of the shroud. Other works of the actor and his connection to Scientology are expected to be on display. “It may be a rare occasion for the public to take part in the church’s celebration and get a peek at a small portion of what their imagined vast art collection is speculated to look like,” said Allen. It’s unknown whether or not the Church of Scientology® will sanction the location beyond the present schedule.

“We are optimistic the controversy that surrounds the church will not keep visitors away. We want to assure people that this public event is a celebration of Tom Cruise and his 25 years of commitment, not a recruiting opportunity for The Church of Scientology,” said Allen.

“Pop-up Church of Scientology” featuring the “Shroud of Scientology” will open to the public at Cory Allen Contemporary Art’s The Showroom, in the Warehouse Arts District, St. Petersburg, Florida, on August 8, 2015. A media conference is scheduled prior to the exhibit on August 6, from 12-4 p.m. For information, contact Cory Allen: 323-393-3115 or http://www.cacanet.com/.

No celebrity endorsement claimed or implied. The Church of Scientology has not endorsed or sponsored this event/art installation. 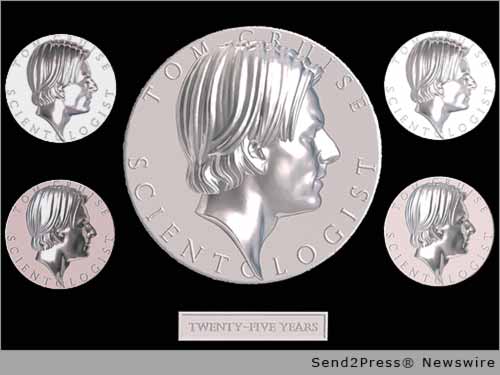 NEWS ARCHIVE NOTE: this archival news content, issued by the news source via Send2Press Newswire, was originally located in the Send2Press® 2004-2015 2.0 news platform and has been permanently converted/moved (and redirected) into our 3.0 platform. Also note the story “reads” counter (bottom of page) does not include any data prior to Oct. 30, 2016. This press release was originally published/issued: Wed, 29 Jul 2015 13:15:53 +0000

View More Entertainment News
"Radiocarbon dating will never rule out the Shroud of Scientology's authenticity. It exists as a document of Tom Cruise's faith in Scientology - a photo negative of the radiance of his soul. It gives evidence for future generations that Tom Cruise not only belonged to Scientology, but saved it from obscurity," said Edwards.

LEGAL NOTICE AND TERMS OF USE: The content of the above press release was provided by the “news source” Cory Allen Contemporary Art or authorized agency, who is solely responsible for its accuracy. Send2Press® is the originating wire service for this story and content is Copr. © Cory Allen Contemporary Art with newswire version Copr. © 2015 Send2Press (a service of Neotrope). All trademarks acknowledged. Information is believed accurate, as provided by news source or authorized agency, however is not guaranteed, and you assume all risk for use of any information found herein/hereupon.