DESTIN, Fla., May 14, 2021 (SEND2PRESS NEWSWIRE) — In 2020, readers of “Nation’s Restaurant News” had a chance to weigh in on who they considered leaders in the restaurant industry. The people have spoken and Florida’s own Alan Laird, owner of AJ’s Seafood & Oyster Bar, ranked number 37 out of 500 submissions in the category for “Most Influential Restaurant Executives in the Country” on its “Power List 2020.” 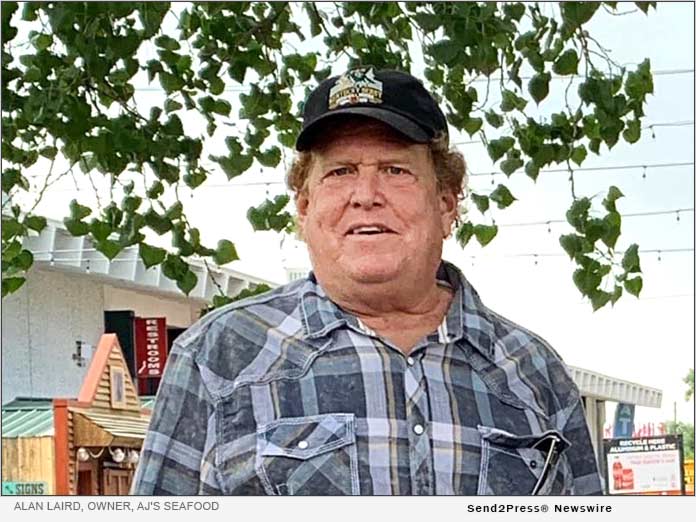 “Nation’s Restaurant News” released its selections for its annual “Power List Reader Picks” in February 2021 and Laird was thrilled and honored to be recognized and to join some of the top players in the restaurant industry. This year’s list focused on leadership and nominees ranged from restaurant CEOs and chefs to store managers who are making an impact through innovation.

So, what’s Laird’s secret to success? It’s a pretty simple formula. Laird believes that it all hinges on good communication between staff and being polite to customers and each other.

“When customers come in, say ‘hello.’ Thank them for coming in when they’re on their way out and ask if they enjoyed everything. Invite them to come back in,” he says.

Laird has remained true to this basic philosophy since opening his doors in 1984 and apparently, it’s paid off.

“I wouldn’t be here today without this great team behind me,” he says. “I appreciate that they have helped me to continue to stand out among restaurant executives across the country.”

Laird, a Florida native, was born and raised in the state’s panhandle, and has worked in restaurants all his life. In 1984, he opened the first AJ’s Seafood & Oyster Bar. It started out as a small burger and oyster joint that sold beer. Today, he has four restaurant locations and a 55-acre farm where he raises Black Angus, Waygu cattle and seasonal produce that he uses in these restaurants. The latest addition is a public market in Destin, AJ’s Specialty Meats and Gourmet Market, that sells locally-sourced meats and produce.

Laird has also broken out into beverage branding over the past few years and is excited about AJ’s branded vodka and two different beers brewed exclusively for AJ’s by Props Craft Beer. These products are available at all AJ’s locations, as well as local restaurants and stores in the panhandle.

AJ’s Seafood & Oyster Bar serves the freshest seafood and mixed drinks along the beautiful Emerald Coast. It has live entertainment seven days a week and has been recognized on many local lists that include “Best of the Emerald Coast,” and “Best of South Walton.” It’s also received national recognition from “Nightclub and Bar Magazine” as one of “America’s Top 100 Nightclubs in the United States.”

View More Restaurant Hotel and Hospitality News
"I wouldn't be here today without this great team behind me," Laird says. "I appreciate that they have helped me to continue to stand out among restaurant executives across the country."

ABOUT THE NEWS SOURCE:
AJ's Seafood and Oyster Bar

Located off Scenic Highway 30A, AJ’s Grayton Beach is the newest location in the AJ’s family. Formerly Pandora’s, AJ’s transformed this location into a cool, coastal cabana with comfortable indoor and outdoor seating. Inside, three bars, two stages and a dining area, complement the lush outdoor patio and firepit. AJ’s Grayton Beach was voted one of 30A’s Hottest Spots for Live Music.

LEGAL NOTICE AND TERMS OF USE: The content of the above press release was provided by the “news source” AJ's Seafood and Oyster Bar or authorized agency, who is solely responsible for its accuracy. Send2Press® is the originating wire service for this story and content is Copr. © AJ's Seafood and Oyster Bar with newswire version Copr. © 2021 Send2Press (a service of Neotrope). All trademarks acknowledged. Information is believed accurate, as provided by news source or authorized agency, however is not guaranteed, and you assume all risk for use of any information found herein/hereupon.