Springer Realty Group is celebrating a decade of being in business and serving clients in Pennsylvania, Delaware, and Maryland

EXTON, Pa., Aug. 29, 2019 (SEND2PRESS NEWSWIRE) — Dave Springer, of Springer Realty Group, has always had a passion and drive for real estate. In 2002, while working in the world of corporate finance, he decided to start investing in real estate part-time. Soon after, he left his corporate job to become a full-time real estate agent. In 2009, Springer decided to take a major leap of faith by opening his own real estate brokerage. 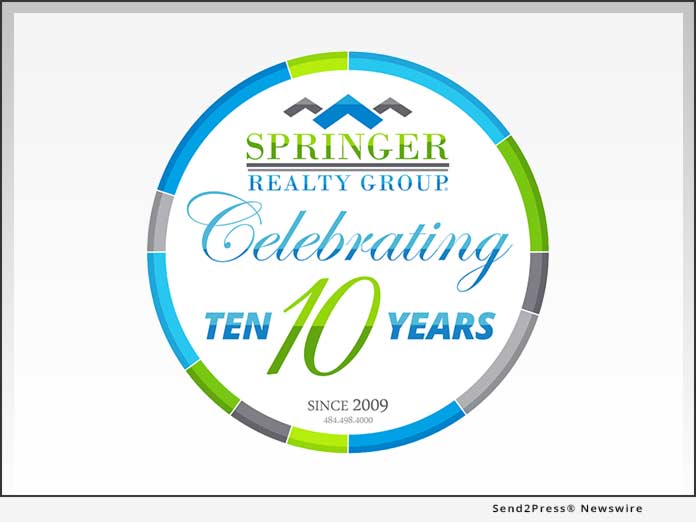 According to conventional wisdom, the timing could not have been worse. You may remember that the real estate market had recently fallen off a cliff in the wake of the 2007-2008 subprime mortgage crisis the same crisis that brought down well-established Wall Street financial firms. While many people in the real estate business were scrambling to find a new career, Springer decided that this was the perfect time to blaze a new trail.

“When I mentioned to my wife back in 2009 that I wanted to start my own independent real estate brokerage, she was beyond supportive but also a little concerned about the timing,” Springer says. “Nonetheless, she was there every step of the way, and that’s when Springer Realty Group (SRG) was born.”

From the outset, Springer sought to build a different type of real estate company, one that would stand out from the others and be well-positioned to thrive in the 21st Century. SRG would be a company that provides agents with maximum flexibility, free in-house marketing and minimal overhead, allowing them to be creative and achieve greater heights than they could while under the umbrella of a top-heavy franchise brand.

“As an independent broker, I wanted to make my company stand out from the rest,” Springer continues. “That is when I came up with the 100% commission plan that my company currently offers. I truly feel that real estate agents should be able to run their business as they see fit; and giving them 100% of their hard-earned commissions allows them to do just that.”

After 10 years in business, Springer’s vision of building a different and better real estate company has been realized. SRG weathered (and even thrived in) the early years, and for the past several years, they have experienced very strong growth. SRG now has five locations, over 200 experienced real estate professionals, and they serve clients and communities across three states; Pennsylvania, Delaware, and Maryland.

It is worth noting that within the past few years alone, SRG has jumped a staggering 160% with regards to agent count, plus a substantial 300% in completed transactions. This helped them earn a highly respectable #6 in the RealTrends 500 rankings of the largest independent brokerages (for closed transactions sides) in Pennsylvania for 2018.

The model of giving agents freedom, flexibility, and support to provide maximum value to real estate buyers and sellers appears to be a winning formula, and Springer Realty Group is optimally positioned to continue growing exponentially well into the future.

“We are pleased to be celebrating 10 outstanding years of business and growth, and this has all been made possible with the unwavering dedication of our incredible agents and expert support team. I am grateful for each and every person who has helped build this company, and I look forward to continued success for many years to come.”

Springer Realty Group is a locally owned, non-franchise brokerage that was founded in 2009. SRG has experienced strong growth since its founding, and within the past few years alone, they have grown in transactions by 300%. SRG runs a nimble and streamlined operation leveraging the most advanced technology and marketing methods to maintain a competitive edge within the marketplace. They have top area agents, an in-house design team, and social media experts who work synergistically to deliver optimal results for clients.

SRG now has five convenient locations throughout Pennsylvania to serve the needs of its growing clientele.

Their offices are located in:

View More Real Estate News
"As an independent broker, I wanted to make my company stand out from the rest," Dave Springer says. "That is when I came up with the 100% commission plan that my company currently offers."

Springer Realty Group is a locally-owned, non-franchise brokerage that was founded in 2009. SRG has experienced strong growth since its founding, and this year they have grown by nearly 50-percent. SRG runs a nimble and streamlined operation leveraging the most advanced technology and marketing methods to maintain a competitive edge within the marketplace. They have top area agents, an in-house design team, and social media experts who work synergistically to deliver optimal results for clients.

LEGAL NOTICE AND TERMS OF USE: The content of the above press release was provided by the “news source” Springer Realty Group or authorized agency, who is solely responsible for its accuracy. Send2Press® is the originating wire service for this story and content is Copr. © Springer Realty Group with newswire version Copr. © 2019 Send2Press (a service of Neotrope). All trademarks acknowledged. Information is believed accurate, as provided by news source or authorized agency, however is not guaranteed, and you assume all risk for use of any information found herein/hereupon.