CHICAGO, Ill., Oct. 2, 2020 (SEND2PRESS NEWSWIRE) — After more than five years in production and spanning 6 continents and 31 countries, 6-year-old Petra Ahmed will take kids and adults on weekly adventures in her new travel series, Reel Energy Entertainment announced today. Australia, Egypt, Scotland, and many more destinations are on the itinerary including a safari in South Africa. 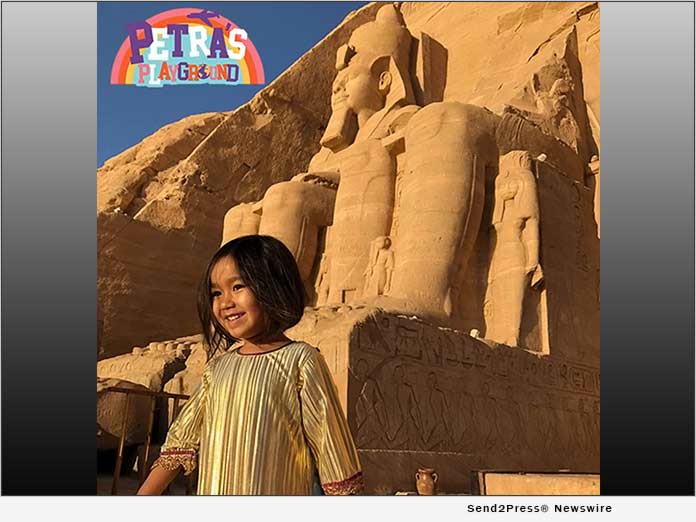 Asif Ahmed, an award-winning independent filmmaker and Petra’s dad, has been following Petra around with a camera in tow since she was born. More importantly, Asif has been trailing her on the road since she was 18 months old and learning to walk on glaciers in southern Patagonia. In the past 18 months Petra has taken to the camera and is now ready to share the world through her eyes, a child’s eyes.

Viewers will visit ancient sites, exotic locales, and go on many adventures. Petra will take you skiing in the Dolomites in Italy and race down runs from the previous Winter Olympics. She fearlessly snorkels in the deep waters of the Great Barrier Reef and free dives at night, hunting for octopus and lobsters.

“We are just scratching the surface on the vision Petra and I have for this series. She has gotten much more comfortable in-front of the camera and is now comprehending the amazing journey she has already experienced. She wants to go deeper into new cultures and meet children around the world while continuing to seek adventure and experience new cuisines. We are going to be ‘Parts Unknown’ for kids.” Offered Creator and Director, Asif Ahmed.

Most of the episodes were filmed before Covid shut the world down, but Petra’s Playground is continuing production this fall by shooting episodes around the United States. We are keeping an eye out for when other countries will open up their border to Americans.

Petra will be hosting a Watch Party at 7 p.m. CDT prior to its premiere taking your questions.

Petra is only 6 years old and has already traveled to 6 continents and 31 countries. She is the perfect mix of Vietnamese and Pakistani and was born in Hollywood. Petra, like her peers, loves rainbows, horses, unicorns, and Disney princesses. She will never turn down vanilla ice cream and red velvet cupcakes. When she’s not in some far-flung locale or in school, she enjoys skiing, swimming, biking, dancing, hiking, horseback riding, drawing, painting, music, gymnastics, and exploring nature.

Asif Ahmed, Petra’s dad, has been producing content since he was 10 years old and is now instilling this passion in his daughter. He produced his first cable show at 10 years old and has written, produced, directed since then. He served as show runner for two cable series and wrote and directed the award-winning feature, Lost Dream, that starred Michael Welch from the Twilight Saga and Emmy Award and Golden Globe nominated Patricia Richardson. Asif’s production company has created content for several brands for various social media channels.

View More Travel and Tourism News
"She wants to go deeper into new cultures and meet children around the world while continuing to seek adventure and experience new cuisines. We are going to be 'Parts Unknown' for kids." Offered Creator and Director, Asif Ahmed.

In Petra's Playground - a Travel Show for Kids, from Reel Energy Entertainment - 6-year-old Petra Ahmed will take kids and adults on weekly adventures in her new travel series. Australia, Egypt, Scotland, and many more destinations are on the itinerary including a safari in South Africa.

LEGAL NOTICE AND TERMS OF USE: The content of the above press release was provided by the “news source” Reel Energy Entertainment or authorized agency, who is solely responsible for its accuracy. Send2Press® is the originating wire service for this story and content is Copr. © Reel Energy Entertainment with newswire version Copr. © 2020 Send2Press (a service of Neotrope). All trademarks acknowledged. Information is believed accurate, as provided by news source or authorized agency, however is not guaranteed, and you assume all risk for use of any information found herein/hereupon.