NORTH LITTLE ROCK, Ark., May 6, 2016 (SEND2PRESS NEWSWIRE) — Powers of Arkansas, the state’s largest commercial HVAC company, announces the promotion of two key leaders at Powers who have contributed leadership and vision to the growth of Powers as the industry leader in commercial HVAC equipment, air distribution, and controls in Arkansas.

He has been influential in sales growth, market penetration and the growth of market share, and strengthening client relations. Scott grew up in the Air Distribution business with his dad putting him to work at the age of 10.

His future responsibilities will include sales growth in Equipment, Air Distribution, Controls and Control vServices. Chase will also be involved in brand development and client relations as Powers continues to grow in Northwest Arkansas. 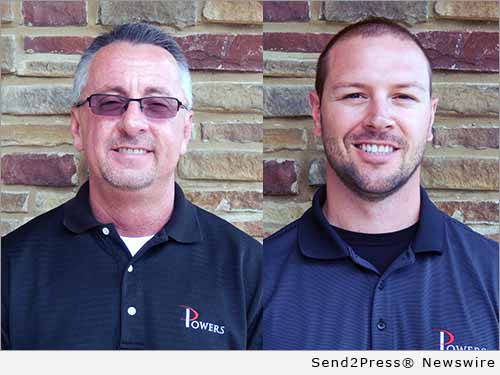 NEWS ARCHIVE NOTE: this archival news content, issued by the news source via Send2Press Newswire, was originally located in the Send2Press® 2004-2015 2.0 news platform and has been permanently converted/moved (and redirected) into our 3.0 platform. Also note the story “reads” counter (bottom of page) does not include any data prior to Oct. 30, 2016. This press release was originally published/issued: Fri, 06 May 2016 06:59:19 +0000

LEGAL NOTICE AND TERMS OF USE: The content of the above press release was provided by the “news source” Powers of Arkansas or authorized agency, who is solely responsible for its accuracy. Send2Press® is the originating wire service for this story and content is Copr. © Powers of Arkansas with newswire version Copr. © 2016 Send2Press (a service of Neotrope). All trademarks acknowledged. Information is believed accurate, as provided by news source or authorized agency, however is not guaranteed, and you assume all risk for use of any information found herein/hereupon.