BROOKLYN, N.Y., Dec. 18, 2017 (SEND2PRESS NEWSWIRE) — A number of personal best performances marked an exceptional early start to the indoor track season as East Coast athletes from Boston to Virginia competed in one of the largest opening preliminary meets of the 44th annual Colgate Women’s Games. 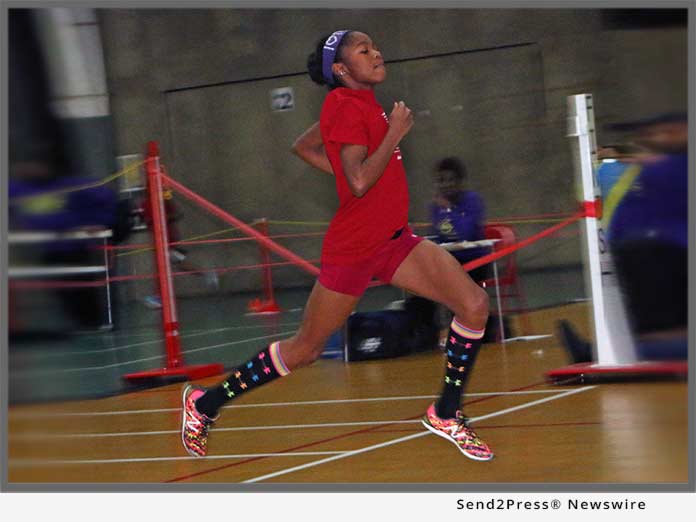 On Saturday, national sprint sensation Avery Lewis with four concurrent sprint records since first grade, moved up to the Mid School division and scored another double win with two personal bests; 7.16 in the 55M, and 25.56 in the 200M. The 11-year-old six grader (who turns twelve this week), attends Westtown School in PA, and has been called one of the fastest girls in the nation every year since her 7th birthday. Lewis holds Colgate Women’s Games’ Elementary A Records in the 55M (7.75) and the 200M (28.09); and Elementary B records in the 55M (7.35) and the 200M (25.99).

Meet Director Cheryl Toussaint calls Avery Lewis a truly gifted young athlete and says competitors like her and many others through the years continue to make the Colgate Women’s Games among the nation’s premiere proving grounds for track and field talent. The Games have produced hundreds of national champions, and with last summer’s six alumnae on Olympic Team USA, 26 former Olympians, and in four decades, countless changed lives.

“The Colgate Women’s Games are primarily about helping girls and young women build self-esteem,” says Toussaint. “Competitive athletics help girls of all abilities discover and improve their skills; and learning they can meet and exceed personal goals are lessons that help women find and expect excellence throughout their lives.”

Toussaint said, “This weekend was especially exciting with the number of athletes enjoying their own personal best performances, something normally not seen until later in the season.” 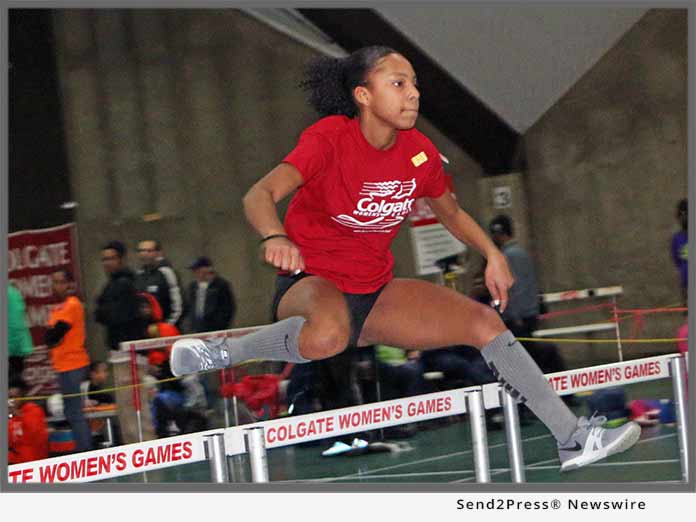 With more personal records in the Mid School division; Peyton Rollins of Andrews MS in Medford, MA won the 55MH in an impressive 8.28; Rowan Houston of Rye Country Day in White Plains NY and Selah Dungey of St. Peter Academy, River Edge, NJ both cleared 5-feet 0-inches in the High Jump; and Melissa Aymil of Mendham MS in Brookside, NJ tossed 10.58 in the Shot Put.

Also in Mid School on Saturday, Simone Kelley of Wissahickon MS in Ambler, PA won the 400M in 59.49; Returning division champion Alina LaForest of Drexel Neumann Acadamey won the 800M in 2:19.02; and Brooklyn’s Rainn Sheppard of Dock Street School won the 1500M in 4:55.13.

Additional results for Saturday’s College/Open, and Sunday’s Elementary A and B and 30’s Plus division events are available at colgategames.com/results.

Participation in the Colgate Women’s Games is completely free. Girls and young women compete within their own age/grade division for ribbons, medals and points. Events include 55 meters, 55-meter hurdles, 200 meters, 400 Meters, 800 meters, 1500 meters, high jump and shot put. Four preliminary meets and a semi-finals at Pratt Institute will determine who will compete at the finals at the New Balance Track and Field Center at The Armory, New York on Saturday, February 10, 2018, where trophies and educational grants-in-aid from Colgate-Palmolive Company are awarded to top place finishers in each division.

Athletes, parents and coaches can follow scores throughout the series and find more information about the program at http://www.colgategames.com/.

PHOTO CAPTIONS:
(1) National sprint sensation Avery Lewis with four concurrent sprint records since first grade, moved up to the Mid School division and scored another double win with two personal bests; 7.16 in the 55M, and 25.56 in the 200M at the opening preliminary meet of the Colgate Women’s Games in Brooklyn, NY on Saturday.

(2) Peyton Rollins of Andrews Middle School in Medford, MA won the 55MH in an impressive 8.28 at the Opening Preliminary meet of the Colgate Women’s Games at Pratt Institute in Brooklyn, NY on Saturday.

View More Track and Field News
"This weekend was especially exciting with the number of athletes enjoying their own personal best performances, something normally not seen until later in the season," said Meet Director Cheryl Toussaint.