EaseUS Deploy Manager is the ideal solution for system deployment to multiple computers or servers simultaneously, which provides maximum flexibility and drives down corporate cost. And this new EaseUS Deploy Manager Special Edition allows one to deploy a system image to 10 machines (including PCs, workstations and servers) for free.

And the following are some key features:
* Help IT admins deploy master image to multiple PCs or Servers simultaneously.
* Available to deploy several groups with different system images or settings.
* Able to boot from WinPE and add drivers to ensure it works on new hardware.
* Support Wake-on-LAN to remotely power on or wake up computers.

Learn more about the EaseUS backup and system deploy software at: http://www.todo-backup.com/. 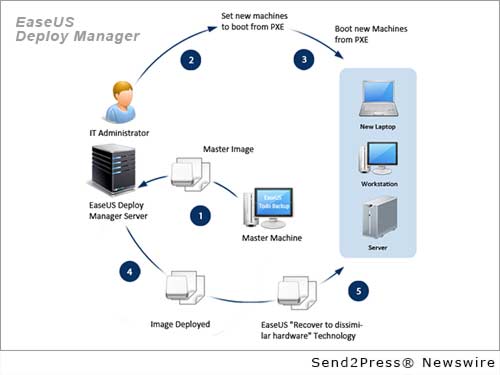 NEWS ARCHIVE NOTE: this archival news content, issued by the news source via Send2Press Newswire, was originally located in the Send2Press® 2004-2015 2.0 news platform and has been permanently converted/moved (and redirected) into our 3.0 platform. Also note the story “reads” counter (bottom of page) does not include any data prior to Oct. 30, 2016. This press release was originally published/issued: Wed, 16 Apr 2014 14:30:23 +0000