"People should be able to instantly see their captured photo, share it and have it automatically stored in the cloud. My 86 year old mom does this daily on her iPhone, that's an example of the best camera," says Fromm.

“I see drones as a great gadget, useful for a very narrow range of professionals though. The old saying that the best camera is the one that’s with you, sums it up. Everyone has a smartphone with them. For photos that you want the next generation to cherish, invest in the smartphone that takes the best photos,” says Fromm.

“People should be able to instantly see their captured photo, share it and have it automatically stored in the cloud. My 86 year old mom does this daily on her iPhone, that’s an example of the best camera,” says Fromm.

Action cameras and drones require a deep knowledge base and editing skills, not for the average user. Despite the hype and hoopla, Fromm is not surprised why the action camera industry is facing pushback and thinks that many drones and action cameras will be left unused in drawers after the initial thrills subside.

He hints that his new invention, slated for release mid-2016, will bring a sea change to the way photos and videos are taken.

For more information on the original patented selfie stick, visit: http://www.QuikPod.com/ and https://twitter.com/quikpod. 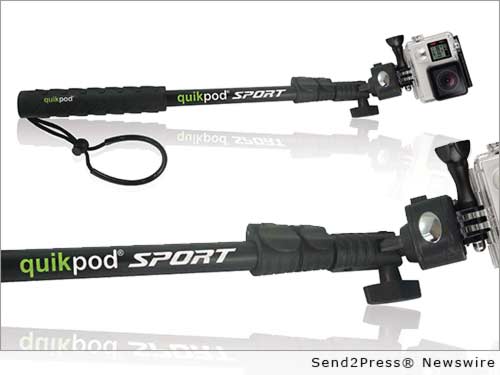 NEWS ARCHIVE NOTE: this archival news content, issued by the news source via Send2Press Newswire, was originally located in the Send2Press® 2004-2015 2.0 news platform and has been permanently converted/moved (and redirected) into our 3.0 platform. Also note the story “reads” counter (bottom of page) does not include any data prior to Oct. 30, 2016. This press release was originally published/issued: Tue, 15 Dec 2015 08:00:23 +0000

View More Communication Arts News
"People should be able to instantly see their captured photo, share it and have it automatically stored in the cloud. My 86 year old mom does this daily on her iPhone, that's an example of the best camera," says Fromm.

LEGAL NOTICE AND TERMS OF USE: The content of the above press release was provided by the “news source” Fromm Works Inc. or authorized agency, who is solely responsible for its accuracy. Send2Press® is the originating wire service for this story and content is Copr. © Fromm Works Inc. with newswire version Copr. © 2015 Send2Press (a service of Neotrope). All trademarks acknowledged. Information is believed accurate, as provided by news source or authorized agency, however is not guaranteed, and you assume all risk for use of any information found herein/hereupon.