The global telecommunications industry faces an imminent crisis in growth of mobile data traffic, and its inability to meet growing demand with the industry’s present (and planned) infrastructure. Wireless carriers compete on the basis of coverage and performance, and both are at risk in the near future.

In response to exponential growth of data traffic over cellular networks, network operators are looking at new, alternative approaches to managing congestion, because the pace of building out new networks is insufficient to keep up with bandwidth demand. Already the incidence of dropped cellular calls has increased markedly.

Carriers are adjusting their business models, expanding coverage areas, deploying 4G and LTE networks, taking advantage of picocells and femtocells and most importantly, they are beginning to offload data traffic onto other networks, primarily WiFi. And yet, these measures will likely prove inadequate.

It is this dire need for carriers to find bandwidth quickly that has presented some unique business opportunities which are analyzed in the Thintri report.

While data traffic migrates from basic-feature handsets and home gateways to a new generation of smartphones, tablets and laptops/netbooks, emergent market drivers are also making themselves felt. Education, healthcare and business, to name just a few, are rapidly moving toward greater use of mobile data.

For example, one of the greatest disruptive influences emerging in mobile networks is machine-to-machine (M2M) data traffic, namely, the communications between electronic devices without human intervention. This “Internet of things” will present an enormous source of wireless bandwidth demand from widely proliferating wireless sensors, electronics connected to power, energy, transportation and communication infrastructures, healthcare devices, manufacturing systems, household appliances and other types of hardware.

A problem the world over is bringing broadband access to those who have been left behind because of geography, limited resources and lack of proximity to digital infrastructure. Wired solutions do not generally reach locations of low population density, which has left many rural populations underserved or unserved. The unserved/underserved market in the U.S. is 3 to 6 percent of the population, almost all in rural locations. In many nations, the percentage is much higher.

The focus in reaching such customers is on wireless technology which will serve to extend existing fiber or other fixed wired networks outside the ranges where they can be profitably deployed.

The use of wireless links to extend fiber networks present a significant opportunity even in more heavily populated areas, where fiber networks are established but nevertheless remain inaccessible for many.

The way out of the current crisis lies on a path similar to that taken by optical fiber network providers. An entire industry has sprung up around businesses setting up links and networks offering dark fiber and wavelength services, often for the sole purpose of selling or leasing this capacity. End users then lease or purchase optical fiber links already in place, or merely lease specific wavelengths on existing “lit” fibers or simply portions of a fiber cable’s capacity.

Emerging technologies such as TV white space and millimeter waves will be key components in bringing a similar model to bear on wireless networks, where wireless links can be set up for the purposes of offloading wireless data traffic from 4G /LTE networks, or simply to lease capacity, or entire links, to anyone who needs it. Both major carriers and smaller firms, similar to those managing dark fiber and wavelength services, are well situated to offer solutions specifically designed to address the burgeoning wireless bandwidth demand.

Bandwidth leasing in the coming bandwidth crisis presents an unusual opportunity for industry participants and other investors. “Opportunities in Broadband Leasing” presents an analysis of those opportunities, provides a survey of the imminent bandwidth crunch, its driving forces, the response of the telecommunications industry, a detailed discussion of potential alternatives and their markets, and demand for wireless broadband leasing over the decade. Forecasts are provided out to 2020.

About Thintri, Inc.:
Founded in 1996, Thintri, Inc. (www.thintri.com), is a full-service consulting firm, based in New York and directed by J. Scott Moore, Ph.D. 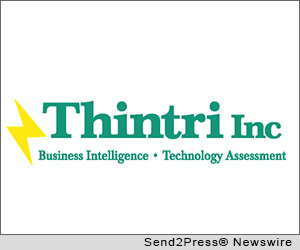 Alternate Headline: Report: ‘Opportunities in Broadband Leasing’ from Thintri, Inc. presents an analysis of telecom opportunities, and a survey of the imminent bandwidth crunch

NEWS ARCHIVE NOTE: this archival news content, issued by the news source via Send2Press Newswire, was originally located in the Send2Press® 2004-2015 2.0 news platform and has been permanently converted/moved (and redirected) into our 3.0 platform. Also note the story “reads” counter (bottom of page) does not include any data prior to Oct. 30, 2016. This press release was originally published/issued: Wed, 02 Jan 2013 14:59:05 +0000

LEGAL NOTICE AND TERMS OF USE: The content of the above press release was provided by the “news source” Thintri, Inc. or authorized agency, who is solely responsible for its accuracy. Send2Press® is the originating wire service for this story and content is Copr. © Thintri, Inc. with newswire version Copr. © 2013 Send2Press (a service of Neotrope). All trademarks acknowledged. Information is believed accurate, as provided by news source or authorized agency, however is not guaranteed, and you assume all risk for use of any information found herein/hereupon.