CEDAR GROVE, N.J., Feb. 28, 2017 (SEND2PRESS NEWSWIRE) — The SUDC Foundation, the only organization worldwide dedicated to sudden unexplained death in childhood (SUDC), has awarded nearly $100,000 to the National Association of Medical Examiners (NAME) to work collaboratively with the American Academy of Pediatrics (AAP) to investigate and establish national practice guidelines surrounding the investigations of sudden unexpected deaths in infants and young children, to determine research needs and the sensitive care of families affected. 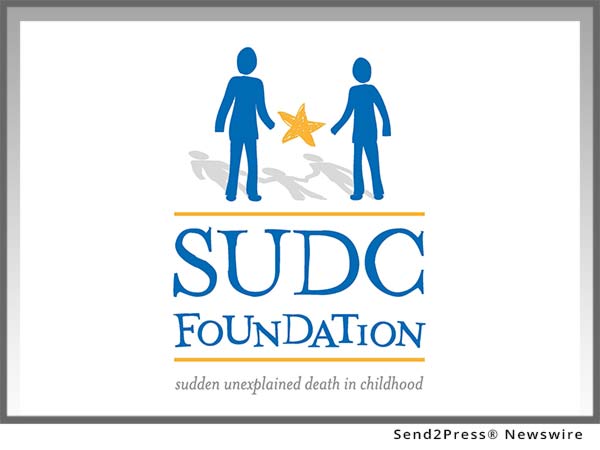 The death of a child has profound effects on families and serious implications for our public health system particularly when the death is sudden and unexpected in an apparently healthy infant or child. While causes of these pediatric deaths are numerous and span natural disease, accidents and deaths due to abuse, many are not fully explained despite current efforts.

“No formal standards exist today that delineate the roles of those tasked with the death investigation of a child who dies suddenly, unexpectedly, and without an obvious cause,” said Brian Peterson, MD, President of NAME. “We aim to change this by introducing evidence-based protocols that create uniformity and consistency in investigative procedures nationwide.”

For the “Sudden Death in Pediatrics: Consensus for Investigation, Certification, Research Direction and Family Needs” project, NAME and AAP will work together to address these issues, leveraging their respective resources, expertise, and reputations. NAME and the AAP are also working collaboratively to revise the AAP policy statement, “Distinguishing Sudden Infant Death Syndrome.”

“Although this task has been attempted by smaller groups in the past with limited success, we are confident that our strategic collaboration is set up for success because it is based on each organization’s strong commitment to carry out a common mission,” said Dr. Peterson of NAME.

“The death of an infant or child is devastating to all those involved. The SUDC Foundation is proud to support this amazing project that will help us better understand these tragedies, improve our surveillance of them, lead to prevention strategies and best support those most personally affected,” said Laura Crandall, MA, President and Executive Director of the SUDC Foundation.“

“As pediatricians who are dedicated to caring for children and preventing illness and injury, the death of any child is heartbreaking,” said Vincent Palusci, MD, FAAP, member of the Executive Committee of the AAP Section on Child Abuse and Neglect. “Many pediatricians participate in community activities such as child death review to help understand the causes of sudden, unexpected deaths, and to identify ways to prevent them. The AAP is proud to be working with NAME to address these important issues and prevent further deaths.”

The Sudden Death in Pediatrics project will commence this month to create an expert panel review of sudden and unexpected deaths in pre-pubescent children. This panel, identified by NAME and AAP, will be composed of professionals from various disciplines and settings representing the interests of death investigation, autopsy performance, certifications, genetic/metabolic testing, legal issues, and family needs. All panel members will be active in the practice of medicine in the field of sudden death in infants and children. Invitations to participate will also be issued to the Centers for Disease Control (CDC) and the National Institutes of Health.

According to the Centers for Disease Control and Prevention, in 2015, about 2800 infants and 400 children died without a clear cause being identified after investigation. Sudden Unexplained Infant Death/Sudden Infant Death Syndrome (SUID/SIDS) and SUDC are age-based terms sometimes used to describe the sudden death of an infant or child which remains unexplained after a thorough case investigation is conducted and other possible causes have been ruled out. They may also be categorized as “undetermined.” SUID/SIDS are used to describe deaths less than 12 months of age, and SUDC used for deaths on or after a child’s first birthday.

About the SUDC Foundation:
The SUDC Foundation is devoted solely to the needs of professionals and families touched by the unexpected death of a child aged 12 months or older. Since its inception, the non-profit Foundation has funded crucial research, helped hundreds of families in over 16 countries, and led many advocacy efforts, including the successful passage of the Sudden Unexpected Death Data Enhancement and Awareness Act, which was signed into law by President Obama in December 2014. For more information, visit https://sudc.org/ and follow us on Twitter @SUDC.

About the American Academy of Pediatrics:
The American Academy of Pediatrics is an organization of 66,000 primary care pediatricians, pediatric medical subspecialists and pediatric surgical specialists dedicated to the health, safety and well-being of infants, children, adolescents and young adults. For more information, visit https://www.aap.org/ and follow us on Twitter @AmerAcadPeds.

About the National Association of Medical Examiners:
The National Association of Medical Examiners (NAME) is the national professional organization of forensic pathologists, physician medical examiners, medical death investigators and death investigation system administrators who perform the official duties of the medico-legal investigation of deaths of public interest in the United States. NAME was founded in 1966 and currently has over 1000 members. For more information, visit us at: http://www.thename.org/.

View More Health and Medical News
"No formal standards exist today that delineate the roles of those tasked with the death investigation of a child who dies suddenly, unexpectedly, and without an obvious cause," said Brian Peterson, MD, President of NAME.

LEGAL NOTICE AND TERMS OF USE: The content of the above press release was provided by the “news source” SUDC Foundation or authorized agency, who is solely responsible for its accuracy. Send2Press® is the originating wire service for this story and content is Copr. © SUDC Foundation with newswire version Copr. © 2017 Send2Press (a service of Neotrope). All trademarks acknowledged. Information is believed accurate, as provided by news source or authorized agency, however is not guaranteed, and you assume all risk for use of any information found herein/hereupon.