ARLINGTON, Mass., Nov. 7, 2016 (SEND2PRESS NEWSWIRE) — SunBug Solar has been selected as the installer for the upcoming Solarize Mass program for the western Massachusetts towns of Windsor, Cummington, Goshen, and Worthington. The installer selection process was highly competitive, and SunBug Solar was unanimously chosen by town representatives from a competitive pool of eight solar providers. 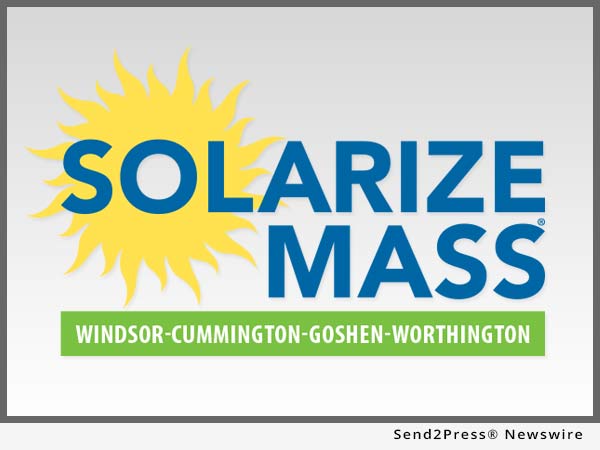 “SunBug clearly demonstrated their technical knowledge as well as an impressive enthusiasm to be part of our team,” said Rev. Alex Hunter, a member of the selection committee.

“Being awarded the project is a great honor for SunBug,” said Aaron Simms, general manager of SunBug’s western Massachusetts operations. “We are excited to bring attractive, efficient, and affordable photovoltaic systems to these four towns.”

SunBug’s success in the area prompted them to establish an office and warehouse in Westfield to better address customers that seek SunBug’s best-in-class solar consultation, design, installation and service. The timing of the Solarize Mass program for Windsor, Cummington, Goshen, and Worthington couldn’t be better as SunBug expands their presence in western Massachusetts.

“At SunBug, we believe a thoughtful approach to solar installation benefits not just the individual customer today, but the entire community for years to come,” said Simms. Since being founded in Somerville in 2009, SunBug has developed deep and diverse expertise, with over a thousand homeowner, nonprofit, school, and local business customers in Massachusetts.

The Solarize Mass program is a partnership between the Massachusetts Clean Energy Center (MassCEC) and the Green Communities Division of the Department of Energy Resources (DOER) that encourages the adoption of small scale solar in Massachusetts communities. Since its launch in 2011, 51 cities and towns have participated in Solarize Mass. This has led to the contracting of more than 2,700 new small-scale installations at homes and businesses, amounting to the installation of over 17 megawatts of solar power.

“This program is focused on lowering costs and embracing the power of community solutions to make the adoption of solar electricity more accessible to residents throughout the Commonwealth,” said MassCEC Interim CEO Stephen Pike. “We are pleased to partner with Sunbug Solar and provide the environmental and economic benefits this program offers to these communities.”

This past June, the towns of Windsor, Cummington, Goshen, and Worthington were awarded a Solarize Mass grant. Residents of these towns qualify for a group purchasing agreement, resulting in discounts on purchasing solar photovoltaic systems that are as much as 25 percent below the average price of solar photovoltaic energy systems in Massachusetts. All homeowners and businesses in these towns are also eligible for free, no-obligation site screenings from SunBug Solar.

LEGAL NOTICE AND TERMS OF USE: The content of the above press release was provided by the “news source” SunBug Solar or authorized agency, who is solely responsible for its accuracy. Send2Press® is the originating wire service for this story and content is Copr. © SunBug Solar with newswire version Copr. © 2016 Send2Press (a service of Neotrope). All trademarks acknowledged. Information is believed accurate, as provided by news source or authorized agency, however is not guaranteed, and you assume all risk for use of any information found herein/hereupon.