The theme of the event is 'Modifying Human Perception'

IRVINE, Calif., July 22, 2019 (SEND2PRESS NEWSWIRE) — TEDxIVC recently announced their speaker applications for those interested in giving a TEDx Talk at the event, which will take place in the Performing Arts Center at Irvine Valley College on March 6, 2020. The theme of the event is “Modifying Human Perception” which is intended to introduce the audience to, as stated on TED’s page, a “hidden array of thoughts and ideas that will effectively challenge our perspectives on life.” 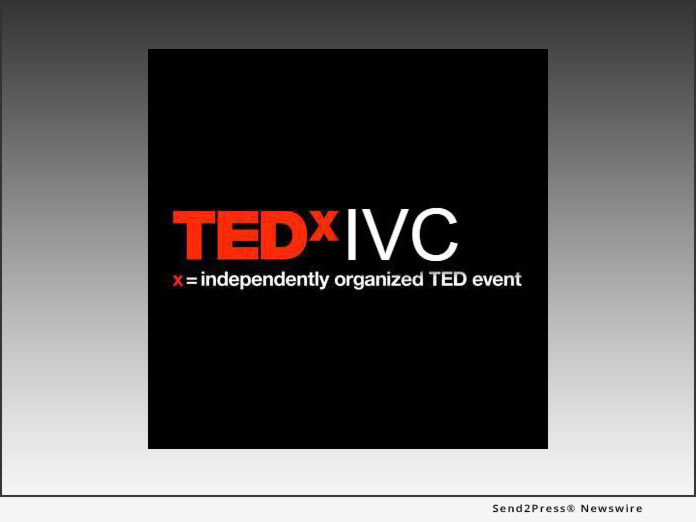 Those interested in speaking will have until the end of August to submit their application to get the chance to speak at TEDxIVC, as the nomination forms close on August 31, 2019.

TEDxIVC will be selecting 5 speakers from the application forms to give a TEDx Talk at IVC. Although prior public speaking experience is preferred, anyone that genuinely believes they have an idea worth spreading is encouraged to apply. Applicants are expected, however, to have underlying credentials revolving around the topic of their speech.

TEDxIVC will be an event to remember in California.

For press, sponsorship, or other inquiries, contact us via info@tedxivc.org.

TED is a nonprofit organization devoted to Ideas Worth Spreading, often in the form of short talks delivered by leading thinkers and doers. Many of these talks are given at TED conferences, including our annual gathering in Vancouver, as well as TEDWomen, intimate TED Salons and thousands of independently organized TEDx events around the world. Videos of these talks are made available, free, on TED.com and other platforms. Audio versions of the talks from TED2019 will also be published to TED’s podcast TED Talks Daily, available on Apple Podcasts and all other podcast platforms.

TED’s open and free initiatives for spreading ideas include TED.com, where new TED Talk videos are posted daily; TEDx, which licenses thousands of individuals and groups to host local, self-organized TED-style events around the world; the TED Fellows program, which selects innovators from around the globe to amplify the impact of their remarkable projects and activities; the Audacious Project, which surfaces and funds critical ideas that have the potential to impact millions of lives; TEDSummit, which gathers the most engaged members of the global TED community for brainstorms, discussions, performances, workshops and an eclectic program of mainstage talks; and the educational initiative TED-Ed.

TED also has a library of original podcasts, including The TED Interview with Chris Anderson, Sincerely, X, and one of Apple Podcasts’ most downloaded new shows of 2018, WorkLife with Adam Grant. Follow TED on Twitter at http://twitter.com/TEDTalks, on Facebook at http://www.facebook.com/TED, on Instagram at https://instagram.com/ted and on Snapchat at tedtalkshq.

ABOUT THE NEWS SOURCE:
TEDxIVC

TEDxIVC is a TEDx Talk taking place in the Performing Arts Center at Irvine Valley College (IVC) in California, on March 6, 2020. The theme of the event is "Modifying Human Perception" which is intended to introduce the audience to, as stated on TED's page, a "hidden array of thoughts and ideas that will effectively challenge our perspectives on life." Independently run TEDx events help share ideas in communities around the world.

LEGAL NOTICE AND TERMS OF USE: The content of the above press release was provided by the “news source” TEDxIVC or authorized agency, who is solely responsible for its accuracy. Send2Press® is the originating wire service for this story and content is Copr. © TEDxIVC with newswire version Copr. © 2019 Send2Press (a service of Neotrope). All trademarks acknowledged. Information is believed accurate, as provided by news source or authorized agency, however is not guaranteed, and you assume all risk for use of any information found herein/hereupon.