"This is our gift to the city of Fort Worth honoring the Texas Boys Choir - one of the crown jewels of the city," McGrath said. "You'll enjoy it. It was a labor of love for me."

FORT WORTH, Texas, Feb. 10, 2016 (SEND2PRESS NEWSWIRE) — A film documentary commemorating the 70th Anniversary of the Texas Boys Choir will be screened at 7 p.m., Feb. 18 during a special ceremony at the Modern Art Museum of Fort Worth. The documentary – literally seven decades in the making – explores the vast and rich history and legacy of the boys choir. It is written and directed by Gary McGrath, a TBC alum who also is executive director of The Texas State Men and Boys Choir.

“This is our gift to the city of Fort Worth honoring the Texas Boys Choir – one of the crown jewels of the city,” McGrath said. “You’ll enjoy it. It was a labor of love for me.”

This free screening takes place at 7 p.m. on Thursday, Feb. 18, 2016 at the Modern Art Museum of Fort Worth, 3200 Darnell Street. The TBC alums who comprise The Texas State Men and Boys Choir are sponsoring the event, which is free and open to the public. Members of the men’s choir also will perform at the event. There will be free refreshments afterward.

According to McGrath, the screening would serve not only as a boys choir commemoration but also as an attention-getter to help recruit more youngsters and TBC alum to sing for the TSMBC.

“Many former members of the Texas Boys Choir grew up to become members of our Texas State Men and Boys Choir,” McGrath explained. “Now we’re helping train the next generation of young singers with our group.”

McGrath just finished guiding the TSMBC through its first year of existence:

• The Texas State Men and Boys Choir enjoyed a very successful Dec. 16 Christmas concert they performed with The Dorothy Shaw Bell Choir at Arborlawn UMC in Fort Worth.

• This month, February 2016, the Men’s Choir will release their debut record under 4818 Records, distributed through Universal Music Group.

• In the summers to come, the Men and Boys Choir is expected to take international tours of Spain, Scotland and Italy.

“This is our gift to the city of Fort Worth honoring the Texas Boys Choir – one of the crown jewels of the city,” McGrath said.

As an example, McGrath offered a recent performance on the following YouTube clip: https://youtu.be/Lu3r5dES8Zo.

McGrath encourages anyone with interest in joining the men and boys choir to contact him.

“Anyone with a son, nephew or grandson who would be interested in joining – the treble boys choir is for youngsters second grade and up – should contact me as soon as possible,” McGrath said.

To inquire about the 70th anniversary screening or to schedule an interview with the choir, call Gary McGrath at (818) 312-8546. 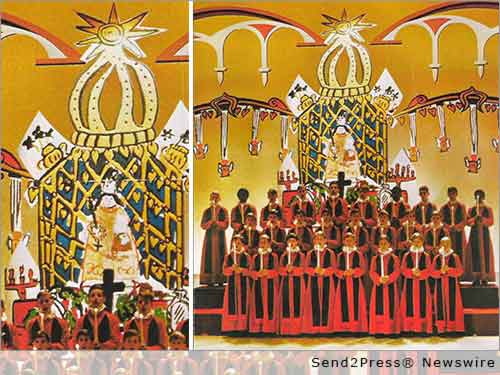 NEWS ARCHIVE NOTE: this archival news content, issued by the news source via Send2Press Newswire, was originally located in the Send2Press® 2004-2015 2.0 news platform and has been permanently converted/moved (and redirected) into our 3.0 platform. Also note the story “reads” counter (bottom of page) does not include any data prior to Oct. 30, 2016. This press release was originally published/issued: Wed, 10 Feb 2016 14:25:52 +0000

Modern Art Museum of Fort Worth

View More Entertainment News
"This is our gift to the city of Fort Worth honoring the Texas Boys Choir - one of the crown jewels of the city," McGrath said. "You'll enjoy it. It was a labor of love for me."

LEGAL NOTICE AND TERMS OF USE: The content of the above press release was provided by the “news source” Texas State Men and Boys Choir or authorized agency, who is solely responsible for its accuracy. Send2Press® is the originating wire service for this story and content is Copr. © Texas State Men and Boys Choir with newswire version Copr. © 2016 Send2Press (a service of Neotrope). All trademarks acknowledged. Information is believed accurate, as provided by news source or authorized agency, however is not guaranteed, and you assume all risk for use of any information found herein/hereupon.