FLINT, Mich., Sept. 24, 2021 (SEND2PRESS NEWSWIRE) — Jonathan McKay, better known by his social influencer tag RoarJMcKay is a psychedelic multimedia content creator hailing from Flint, MI. Harnessing the influence of psychedelia, McKay has begun to apply concepts of geometric structure and interconnectedness visually in abstract ways. After surviving the disastrous “Flint Water Crisis” and fighting a brave battle with Cancer in his saliva glands, Jonathon had a new vision for life. That new vision was “Keeping Tabs.” 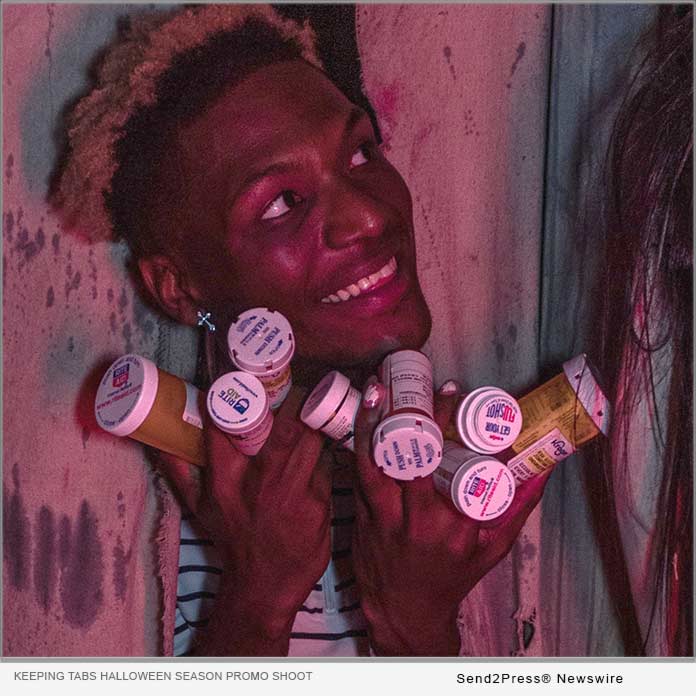 Established in 2017, the sole purpose of Keeping Tabs (KT) has been to bridge the gaps in communication relating to factors of socioeconomic, mental, and physical diversities.

Jonathan has an optimistic personality. Even after surviving such tough battles and handling such trauma, he still looks for the bright side of life. Keeping Tabs (KT) is one of the examples of how important it is for Jonathan to help society in the most innovative of ways.

The brand name Keeping Tabs project is a mobile application doctors use to aid inpatient treatment plans in the prescription process. Its primary focus was the opioid crisis hovering around the U.S. How people are battling with such crises and what guilt they face after recovering from several addictions.

The app includes risk assessment analysis, deviance tests, DSM-5 inventories, and biometrics in a user-friendly format for smooth navigation. KT aims to be a means to combat the growing overprescription epidemic and the opioid crisis. This crisis affects citizens of the United States nationwide. However, McKay has partnered with Midwest community organizations to create hope and spread awareness of proper treatment plans in the pharmaceutical industries.

McKay is a registered member of the organization and has previously presented at the American Psychological Association Convention in Chicago, IL, in the summer of 2019.

Volunteer Medication takes back every quarter with Flint Innovative Solutions (FIS) alongside the University of Michigan – Institute of Clinical Health Research (Ann Arbor). Marketing and multimedia content partnerships with diverse teams of photographers and videographers based in the Midwest for professional content creation.

Keeping Tabs began to extend the barrier in multimedia marketing in 2019 through the recording of the Keeping Tabs Podcast. Produced by Whiting Entertainment, McKay interviews content creators on their brands and asks example questions from the mobile application. The podcast was a huge success immediately and opened the door for a feature interview on fellow Midwest creative series “The DoGood Podcast”

RoarJMcKay did not limit the campaign to podcasts only as his artistry exists through brand partnerships and his current focus lies solely in Keeping Tabs. Using Facebook, Instagram, and Snapchats interactive stories, LinkedIn networks, YouTube videos, and Google SEO to broadcast visually to the audience, the barriers continue into 2021.

The album “Rotting Rationality” highlights the major crisis and issues within the community. It highlights the difficulties people face during a crisis, and the lack of motivation makes them depreciate life.

RoarJMcKay states: “One of the greatest lessons I’ve learned throughout my professional experience has been to accept diversity and respecting other people’s paths to success. Understanding that hard work comes in all shapes and sizes and to never judge a person before you meet them. I’ve met some of my most valuable friends in the creative scene.”

With melodic tones from Kevin Katana of Katana Worldwide and engineered by RIAA-Gold recipients Dre Berg and Duff Didthat of Lifeline Studios located in Royal Oak, MI. This track, along with the messaging and branding of Keeping Tabs, quickly caught the attention of tens of thousands worldwide auditorily and hundreds of thousands cross-platform through both visual and audio media.

This rise in web traffic and in-person collaboration with creatives in his network began the Rotting Rationality tour in May 2021 in Auburn Hills, MI.

This date was followed by a rapid series of performances in cities including Detroit, music festivals in Northern Michigan, Las Vegas, Nevada, and Los Angeles, California by August of the same year.

He has a very positive and unique way of seeing life. He always finds positivity, and that is why with his music, he directly addresses the discouragement and lack of motivation issues within the societies.

The fall booking season picks up where the summer left off in Las Vegas, NV (Sept. 24), where McKay will be joining The Sound Gallery for stop one in the three city Trip Tsunami Tour. Afterward, he will head back to the Midwest for a VIP exclusive event in Detroit, MI (September 30) hosted by Stiizy Los Angeles. Followed by a professional photoshoot with Caroline Pierce of Racine, WI (Oct. 2) to build his corporate modeling portfolio.

The second stop of the Traptsunami Series takes place in Tampa, FL (Oct.  7), where McKay will make his southern regional debut thanks to the Sound Gallery, yet again. In Racine, WI (Oct. 9) McKay will be performing at the Studio Grand Opening of highly acclaimed Midwest content creator Evie McNeil, this leads back to the Midwest.

The last scheduled date of the Traptsunami Tour takes place in Philadelphia, Pennsylvania (October 16) to conclude the autumn booking season leaving plenty of time to prepare for winter. Jonathan sends a huge thanks to all the team members of Urahara’s Music Festival, Gametime Events, Crowdfreak, and the Sound Gallery deserve endless praise for the platform’s assistance in coordinating the summer Rotting Rationality tour.

The new Keeping Tabs and RoarJMcKay merchandise was printed exclusively by Aquarius Co. (Flint, MI). The psychedelic effect of the holographic reflective material not only reflects light but also the positive and diverse influence of festival culture. They are offering two classic material colors, both black and white, and can be matched with holographic vinyl or the contrast white 3M.

The variants of RoarJMcKay and Keeping Tabs are interchangeably available, with all proceeds and donations going to the technical, research, and production teams to continue the campaign’s success. The Rotting Rationality tour highlights McKay’s debut single. It offers new opportunities for supporters to help pivot the Keeping Tabs Awareness Campaign from a regional to a national initiative that caught the attention of event coordinators nationwide.

FOR BOOKINGS AND DETAILS

Beginning November 2021, McKay will be accepting bookings and brand partnerships.

Contact by phone at (810) 874-3756 or email at KTWJM@gmail.com for brand partnerships and ROARJMCKAY@gmail.com for all inquiries involving influencer marketing, entertainment, or collaborations with other artists.

View More Entertainment News
RoarJMcKay states: "One of the greatest lessons I've learned throughout my professional experience has been to accept diversity and respecting other people's paths to success. Understanding that hard work comes in all shapes and sizes and to never judge a person before you meet them. I've met some of my most valuable friends in the creative scene."

Keeping Tabs is a multi-media PR development company dedicated to social issues such as multi-cultural influence, the United States prescription crisis and the importance of mental health. Jonathan McKay, better known by his social influencer tag RoarJMcKay is a psychedelic multimedia content creator hailing from Flint, MI. Harnessing the influence of psychedelia, McKay has begun to apply concepts of geometric structure and interconnectedness visually in abstract ways. After surviving the disastrous "Flint Water Crisis" and fighting a brave battle with Cancer in his saliva glands, Jonathon had a new vision for life. That new vision was "Keeping Tabs."

LEGAL NOTICE AND TERMS OF USE: The content of the above press release was provided by the “news source” Keeping Tabs Media or authorized agency, who is solely responsible for its accuracy. Send2Press® is the originating wire service for this story and content is Copr. © Keeping Tabs Media with newswire version Copr. © 2021 Send2Press (a service of Neotrope). All trademarks acknowledged. Information is believed accurate, as provided by news source or authorized agency, however is not guaranteed, and you assume all risk for use of any information found herein/hereupon.