The program introduces two new works, and ends with a classical favorite.

LOWELL, Mass., Sept. 22, 2021 (SEND2PRESS NEWSWIRE) — The Lowell Chamber Orchestra opens its third season this Saturday, September 25, with music inspired by the cosmos. The three works by Anna Clyne, Micah Roberts, and Wolfgang Amadeus Mozart, all allude to a cosmic object. 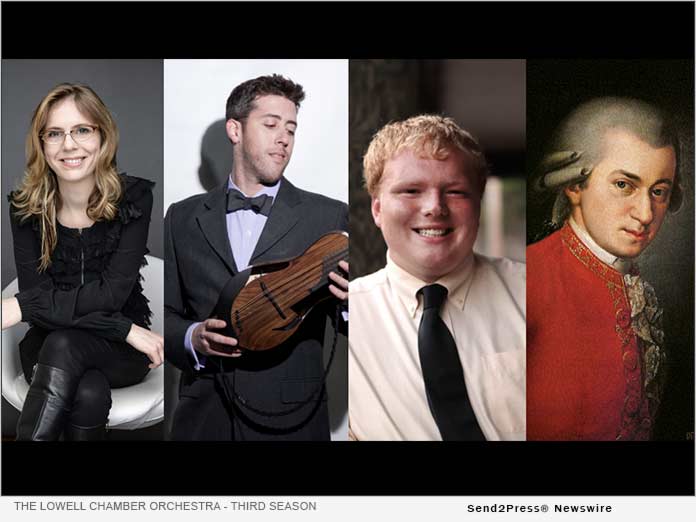 The program starts with “Hypernovae,” written by Tennessee composer Micah Roberts. “Hypernovae” was written for the Lowell Chamber Orchestra’s first ever call-for-scores. Roberts’ score was measured against about other 120 from nine different countries, and the judges were impressed by its driving force and unusual orchestration. “Hypernovae” will receive its first ever performance at the beginning of the program, and the composer will be present.

Following a world premiere, the second work in the program will be heard for the first time in Massachusetts. Anna Clyne’s “Three Sisters” is a concerto for mandolin and string orchestra inspired by the three stars that make the “belt” of the constellation Orion.

About her piece, Clyne says “It’s a piece I actually wrote in 3 locations. And one of the locations was my apartment in Brooklyn that had access to a rooftop and I would sit on the rooftop looking at the stars, often seeing the constellation Orion, which is also known as ‘Three sisters.’ So just thinking about the stars, the passage of time, and that journey.”

Joseph Brent will be the featured soloist of the evening. Called, “one of the truly exceptional musicians of his generation,” Brent has worked closely with many of the great modern composers, and has performed with many well-known chamber ensembles, including The International Contemporary Ensemble, St. Paul Chamber Orchestra, among many others. He is a published author of mandolin pedagogy, and has released a few albums. “By the time I was 13 I knew mandolin was my voice,” says Brent about his musical career’s beginnings. Today, Brent plays mandolins with 5, 8, and 10 strings, all custom-made for him.

The concert ends with the very well know forty-first symphony by Wolfgang Amadeus Mozart. Truthfully, Mozart was not thinking about Jupiter – the planet after which the symphony is named – when he wrote this symphony. According to a story, the nickname comes from a British publisher, who upon hearing the opening chords, thought of the thunderbolts of the ancient Greek god Jupiter. However, the symphony’s majestic structure and use of instruments does compare with the largest planet of the solar system.

The concert is free to attend, but donations are most welcome. Audience is required to show proof of vaccination, and to be masked while indoors.

View More Music and Recording News
About her piece, Clyne says "It's a piece I actually wrote in 3 locations. And one of the locations was my apartment in Brooklyn that had access to a rooftop and I would sit on the rooftop looking at the stars, often seeing the constellation Orion, which is also known as 'Three sisters.' So just thinking about the stars, the passage of time, and that journey."

The Lowell Chamber Orchestra is the city of Lowell's first and only professional orchestra, providing the area with an ensemble that presents music at a very high level, of all styles and time periods, entirely free. The performances take place at Middlesex Community College, the University of Massachusetts Lowell, and at other venues around the area. Some of these locations allow students to attend concerts without leaving their respective campuses, and allow the public in general to attend a concert at a proper performance space.

LEGAL NOTICE AND TERMS OF USE: The content of the above press release was provided by the “news source” Lowell Chamber Orchestra or authorized agency, who is solely responsible for its accuracy. Send2Press® is the originating wire service for this story and content is Copr. © Lowell Chamber Orchestra with newswire version Copr. © 2021 Send2Press (a service of Neotrope). All trademarks acknowledged. Information is believed accurate, as provided by news source or authorized agency, however is not guaranteed, and you assume all risk for use of any information found herein/hereupon.