NEW YORK, N.Y., Aug. 19, 2021 (SEND2PRESS NEWSWIRE) — On Thursday, UltFone, a software company specializing in iPhone/Android solutions, launched the updated variant of their mainstream software: iOS system repair that allows the user to upgrade their iPhones to the latest version seamlessly. Alongside the upgrade, UltFone iOS system repair enables the user to curb 150+ iOS issues and downgrade iOS back to 14 if they don’t enjoy the updated beta look. 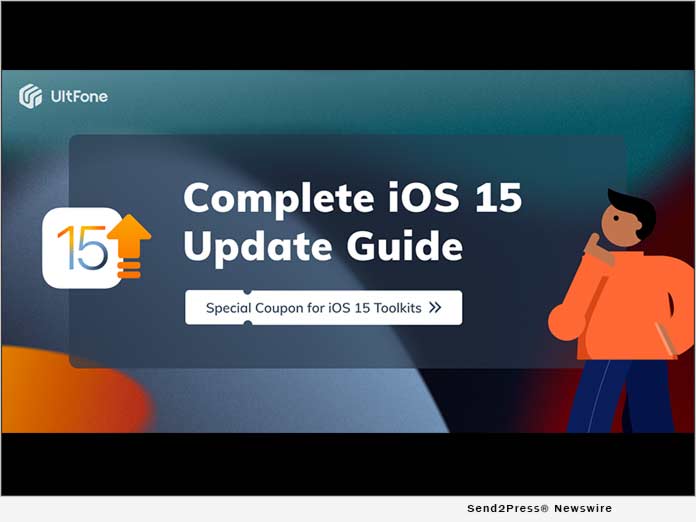 Many iPhone users have faced various issues during their upgrade to iOS 15, including screen stuck, no update detection, insufficient space for download, etc. The software company claims to have curbed the problems of various users throughout their existence, and with UltFone System repair’s update feature, they aim to bring an end to the upgrade woes that Apple users have faced during their transition to iOS 15.

On Jun 7, Apple – the premium smartphone company – launched its latest iOS 15 beta, another addition in their pursuit to be the best. The upgrade brings improved facetime, spotlight, safari, wallet and much more. Tim cook – the CEO of Apple – suggests that the official version would be released by fall 2021. Customers were highly excited to get a new look for their device; however, their excitement didn’t last long as several problems emerged, preventing them from getting their hands on the latest version. Fortunately, UltFone has come up with a solution. UltFone iOS system repair allows iOS/iPad users to upgrade to iOS 15 beta without iTunes in some clicks. And even better, if the users don’t like the upgrade, they can switch back to iOS 14 using the same app.

* When using Standard mode to fix the iOS system, your data will be safely kept on your device.

* The tool is perfectly compatible with iOS 15/14 and latest iPhone models, including the iPhone 12 series.

* With UltFone iOS System Repair, you can easily downgrade your iPhone/iPad from iOS 15 Beta.

* It comes with a user-friendly interface that lets you efficiently fix issues within few minutes.

The paid and free versions are available on the official website of UltFone. There are three different packages available that include 1-Month License for $29.99, a Yearly License for $35.99, and a Lifetime License for $59.95.

For more information or to participate in the event, visit: https://www.ultfone.com/ios-update.html

ABOUT THE NEWS SOURCE:
UltFone

UltFone is composed of a group of tech talents. It is not only committed to improving the quality of products and the user experience, but also adopting continuously advanced technology to create new products cater for the needs of users.

LEGAL NOTICE AND TERMS OF USE: The content of the above press release was provided by the “news source” UltFone or authorized agency, who is solely responsible for its accuracy. Send2Press® is the originating wire service for this story and content is Copr. © UltFone with newswire version Copr. © 2021 Send2Press (a service of Neotrope). All trademarks acknowledged. Information is believed accurate, as provided by news source or authorized agency, however is not guaranteed, and you assume all risk for use of any information found herein/hereupon.