Ted Lange and BerNadette Stanis Star in 'Willie and Esther' 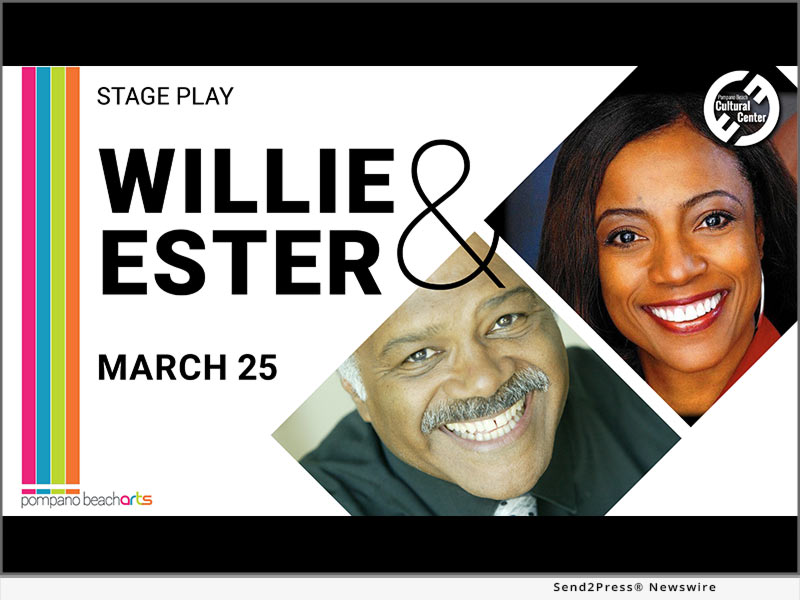 Ted Lange, best known for his role as Isaac on “The Love Boat,” and BerNadette Stanis, who gained fame as Thelma in the groundbreaking sitcom “Good Times,” portray the couple for two special performances; Saturday, March 26 at 7 p.m. and Sunday, March 27 at 3 p.m. Tickets are $45-$75. Learn more at https://www.pompanobeacharts.org.

“’Willie & Esther’ premiered in 1987 at the Inner City Cultural Center in Los Angeles and won first place at the Center’s first short-play competition, beating out more than 100 other plays from around the U.S.,” said Phyllis Korab, Cultural Affairs Director. “Since then, the play has had many successful stagings, including an acclaimed Off-Broadway run. Now, we are thrilled to launch our own production, showcasing the talents of two beloved television stars.”

The play centers on a couple who hatch a plan to overcome their troubles by robbing a bank. A frustrated scam artist, Willie, is a warehouse worker scheming to achieve a big break. Meanwhile, Esther endures the drudgery of her beauty parlor job and Willie’s endless schemes. Hilarious, touching, and real as a bad day, this play’s truth is that sometimes the only way to overcome your troubles is to laugh at them with someone you love.

“Willie & Esther is riotous, seamless, even daring because it pulls out the emotional stops and triumphs on its own terms,” — Los Angeles Times.

BerNadette Stanis is a Juilliard School trained actress, best known for her breakout role as sassy Thelma Evans in “Good Times.” Stanis is also the author of four books: “Situations 101: Relationships, The Good, The Bad & The Ugly”; “For Men Only”; “Situations 101: Finances”; and “The Last Night.”

Ted Lange personifies the Renaissance Man Theatre Award he received from the NAACP. A graduate of London’s Royal Academy of Dramatic Art, Lange’s career had gained worldwide attention as a gifted actor of stage and screen, revered director and prolific writer. He has written 25 plays and counts three Shakespearean plays among his directing credits.

Join us for a screening of an episode of “The Love Boat” at 7:15 p.m. followed by an Interview and audience Q&A with Theodore William Lange who portrayed Isaac on the wildly successful television show. This romantic and comic drama aired from 1977 to 1987 on ABC and followed three story lines of the passengers and crew of the cruise ship, Pacific Princess.

Join us for a screening of an episode of “Good Times” at 7:15 p.m. followed by an Interview and audience Q&A with BernNadette Stanis who played Thelma on the sitcom that aired for six seasons on CBS from 1974 to 1979. Created by Eric Monte and Mike Evans and developed by executive producer Norman Lear, “Good Times” was television’s first African American two-parent family sitcom. Florida and James Evans and their three children live in a public housing project in a poor, black neighborhood in inner-city Chicago and the show’s characters attempt to overcome poverty.

In this playwriting masterclass led by legendary actor, playwright, and director Ted Lange from the iconic television show “The Love Boat” you will discover or rediscover, the playwriter in you! Whether you’ve never written anything before, you’re experienced in another kind of writing, or you’re a playwright looking to sharpen your skills, “Writing the Play” offers clear, step-by-step guidance in the basics: character, conflict, and structure, setting, dialogue, and formatting. But that’s not all. Need to make that good script great? We’ll study more than a dozen elements you can use in the rewriting process to move your script up a level and then discuss what to do next in the development process.

About the City of Pompano Beach Cultural Affairs Department

View More Performing Arts News
"'Willie and Esther' premiered in 1987 at the Inner City Cultural Center in Los Angeles and won first place at the Center's first short-play competition, beating out more than 100 other plays from around the U.S.," said Phyllis Korab, Cultural Affairs Director.

LEGAL NOTICE AND TERMS OF USE: The content of the above press release was provided by the “news source” Pompano Beach Arts or authorized agency, who is solely responsible for its accuracy. Send2Press® is the originating wire service for this story and content is Copr. © Pompano Beach Arts with newswire version Copr. © 2022 Send2Press (a service of Neotrope). All trademarks acknowledged. Information is believed accurate, as provided by news source or authorized agency, however is not guaranteed, and you assume all risk for use of any information found herein/hereupon.