BROOKLYN, N.Y., Nov. 24, 2015 (SEND2PRESS NEWSWIRE) — Committed to spreading the word of God, Unique Messengers recently debuted their first album, “Jesus is Coming,” and is gearing up for an international tour next spring.

“Jesus is Coming,” an original and thought provoking album, delivers a fusion of styles that includes rhythm and blues, reggae, Soca and rap. It’s clearly music that makes you want to move your body and awakens your spirit.

“This ‘Jesus is Coming’ project is explosive!” Bishop Mario Ford of Pilgrim Church of Bushwick, says. “The music and the words emphasize the Gospel message of the coming of our Lord Jesus Christ.”

Promoter, Lester Robinson, agrees that, “‘Jesus is Coming’ is a phenomenal and timely album that will impact the entire world.”

Winfield Craig, the group’s founder, is a native of Trinidad and Tobago. He says that God speaks to him through dreams, and his friends and family know that when he has a dream, it always comes to pass. The “Jesus is Coming” project resulted from a dream he had while living in Trinidad. In the dream, he was in America, saw snow falling and started singing, “Jesus is Coming.” He looked up and saw a hole in the sky and Jesus returned. The rest is history.

Craig moved to America, and with more than 30 years of experience behind him of founding and performing with gospel groups, he recruited Rex Faison and Albert Henry to create Unique Messengers.

The band’s combined experience is impressive. Among their successes, Rex was the lead vocalist for The Melody Men while in the military at Fort Bragg, North Carolina and Albert performed as a vocalist and guitarist for Mickey Mills and the Birds (who later became Two Plus Three) and K.C. and The Flames.

“Music reaches into people’s lives like Jesus did to bring them where he is,” Faison says. “Those who hear this music – it will have a very positive experience on their lives.”

A book is also in the works that documents the making of the album.

The album is available at: http://www.uniquemessengers.com/ and on iTunes, Google Play and CDBaby.com. 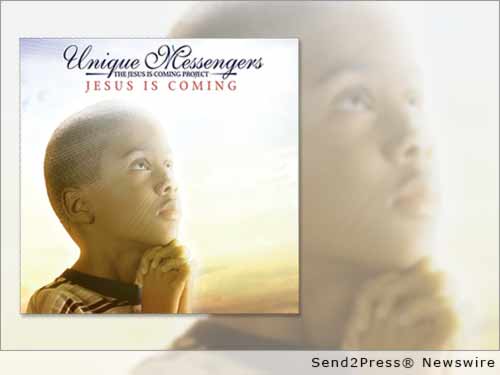 NEWS ARCHIVE NOTE: this archival news content, issued by the news source via Send2Press Newswire, was originally located in the Send2Press® 2004-2015 2.0 news platform and has been permanently converted/moved (and redirected) into our 3.0 platform. Also note the story “reads” counter (bottom of page) does not include any data prior to Oct. 30, 2016. This press release was originally published/issued: Tue, 24 Nov 2015 07:00:53 +0000

View More Music and Recording News
"This 'Jesus is Coming' project is explosive!" Bishop Mario Ford of Pilgrim Church of Bushwick, says. "The music and the words emphasize the Gospel message of the coming of our Lord Jesus Christ."

ABOUT THE NEWS SOURCE:
Unique Messengers

Unique Messengers is comprised of two men, Winfield Craig, and Albert Henry, who are passionate about their desire to inspire and motivate others through the messages in their music.

LEGAL NOTICE AND TERMS OF USE: The content of the above press release was provided by the “news source” Unique Messengers or authorized agency, who is solely responsible for its accuracy. Send2Press® is the originating wire service for this story and content is Copr. © Unique Messengers with newswire version Copr. © 2015 Send2Press (a service of Neotrope). All trademarks acknowledged. Information is believed accurate, as provided by news source or authorized agency, however is not guaranteed, and you assume all risk for use of any information found herein/hereupon.