BROOKLYN, N.Y., Jan. 9, 2017 (SEND2PRESS NEWSWIRE) — Pratt Institute: Thousands of young athletes braved the cold outside while the competition heated up inside at the third preliminary meet of nation’s largest amateur track series for women, the 43rd annual Colgate Women’s Games. From Boston to Georgia, girls of all abilities from elementary school through college and beyond continued to improve, with many leaders now achieving nationally ranked scores. 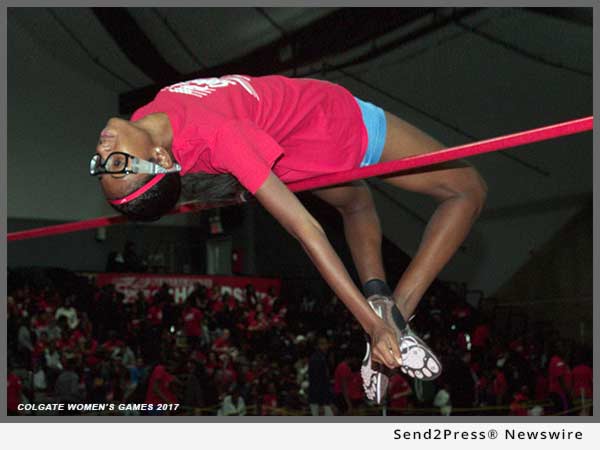 On Friday in the High School division, Brooklyn High Jump champion My’khiyah Williams cleared 5’6” for the win. Williams holds both the Mid School record of 5’6 1/2” set in 2015, and the Elementary B record 4’9” set in 2012.

Philadelphia’s Arianna Ruffin has shown remarkable improvement with a win in her personal best time of 25.87. Ruffin finished ninth in the 200 meters in the opening meet, then rose last week to a second place finish before this week’s victory. Coach Ken Abney, who has developed dozens of young athletes into some of the nation’s best young talent, has helped Ruffin grow from a naturally gifted athlete into a leading competitor.

Meet Director Cheryl Toussaint said, “While we’re proud that the Colgate Women’s Games showcase leading athletes, we’re even more pleased to see so many girls of all abilities discovering and improving their talents.”

On Saturday in the Mid School Division, Lauren Princz of Fernwood MS in Egg Harbor Township continues to lead the 55 meters after a 7.26 finish, a repeat of her indoor track personal record. Tia Taylor remained undefeated in the 55 meter hurdles with her win in 8.41. The 8th grader from Egg Harbor Community School, N.J. is ranked the number one 13-year-old in the nation in the long jump and won two gold medals at the Junior Olympic Games in Houston this summer. Brianna Brown of Bronx Latin School, climbed back into first place with two of her best races this season, winning the 200 meters in 25.63 and 400 meters in 59.09. Marcia Ojo of Franklin Park, N.J. improved by more than 9 seconds over last week to win the 800 meters in 2:20.53 her new personal indoor record; and Lauren Heskin of Floral Park Memorial, Queens won the 1500 meters in 4:47.54.

The Colgate Women’s Games remain completely free as a means for all girls to develop their sense of personal achievement and self esteem in an atmosphere of friendly competition. The Colgate Games’ promote the importance of continued education and provide a training ground for those who might not otherwise participate in organized sports.

Four preliminary meets and a semi-finals at Pratt Institute determine who will compete at the finals at the New Balance Track and Field Center at The Armory, New York Saturday, February 18, 2017, where trophies and educational grants-in-aid from Colgate-Palmolive Company are awarded to top place finishers in each grade division.

*Photo Caption: Brooklyn High Jump champion My’khiyah Williams cleared 5’6” for the win in the High School division of the 43rd Annual Colgate Women’s Games at Pratt Institute on Friday. Williams holds both the Mid School record of 5’6 ½” set in 2015, and the Elementary B record 4’9” set in 2012. Four preliminary meets and a semi-finals at Pratt Institute determine who will compete at the finals at The Armory, NYC in February for trophies and educational grants-in-aid from Colgate-Palmolive Company. Follow scores at colgategames.com.

* Photos available of each competitor highlighted at colgategames.com/gallery

View More Sports and Activities News
Meet Director Cheryl Toussaint said, "While we're proud that the Colgate Women's Games showcase leading athletes, we're even more pleased to see so many girls of all abilities discovering and improving their talents."