HONG KONG, May 10, 2017 (SEND2PRESS NEWSWIRE) — Wondershare releases TunesGo 9.4.0 with a brand new, innovative ringtone maker for iOS. Wondershare Technology, a leading global app development company in China, has released an updated version of its popular TunesGo app. TunesGo is the ultimate media and communication management tool for iOS and Android devices, allowing you to transfer and backup contacts and media such as photos, music, and videos, as well as SMS communications. 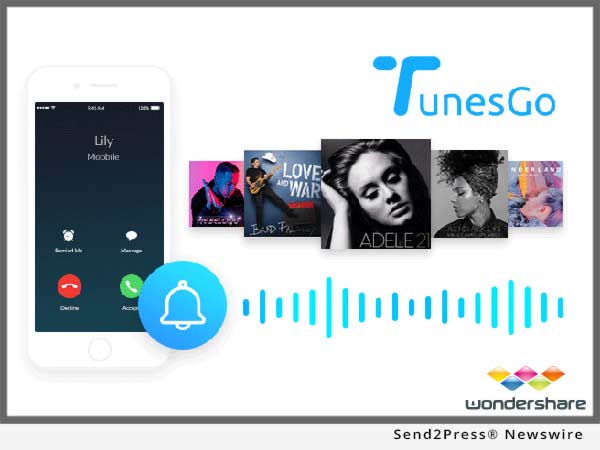 With TunesGo, you don’t have to worry about losing your music purchases, special photos, and important contacts or messages.

The release of TunesGo 9.4.0 brings with it a brand new, innovative ringtone maker for iOS. Usually, music download services such as iTunes only allow a user to download a music track to their computer or phone from the iTunes store, however, once purchased, the ringtone can only be used in its original form and not adapted to suit the preference of the user – not much good if the beginning of your favourite track has a quiet instrumental and the beat doesn’t get up until later in the song.

However, TunesGo’s new ringtone maker for Android allows users to customize their ringtone by selecting a specific section of the track of choice which can then be used as a ringtone, rather than the song in its entirety, and then easily added to the phone. This way, users can choose the most engaging section of the music track rather than having their ringtone begin with a soft instrumental, for instance, which could mean having to use a different track that you like less or, worse still, missing an important call.

Wondershare’s TunesGo app is a one-stop shop for all your music management needs. The powerful tech innovation not only lets you seamlessly transfer music from your computer to your Apple or Android device and back again, but it also allows you to upload your music from your device to your iTunes Library quickly and efficiently, without having to wait for seemingly never ending loading bars. If you like to share your passion for great sound, rest assured that, with TunesGo, you can easily transfer music between Apple and Android devices, too – you are not restricted by dated software limitations here.

Duplicate music files can be incredibly annoying so TunesGo have developed an easy search solution that allows you to find and delete duplicate files without scrolling for hours – this practical search function is supported by an effective ID3 tagging tool Apple and Android devices, too, which means you can tag your favourite songs appropriately and find them in seconds at any time.

When you choose TunesGo, you’re not only choosing to embrace the nifty new ringtone manager, but you’re also choosing a seamless phone management system that will make organising your device a breeze – no longer will days be spent sorting your phone into practical, easy-to-find folders or backing up your media, because TunesGo has done it for you. Better still, rather than relying on iTunes for your iOS features, you can manage everything in one place without it. TunesGo is fully compatible with iOS 10.3 and Android 7.0 – the talented team at TunesGo truly have thought of everything.

About Wondershare:
Founded in 2003, Wondershare Technology is a leading global app development company in China. In 2011, they were named one of Forbes’ China Potential Enterprises – and again in 2012.

ABOUT THE NEWS SOURCE:
Wondershare Inc.

Founded more than a decade ago, Wondershare has evolved into one of the most esteemed data recovery software providers. The company is a key member of the National Planning Software Enterprises, and has a user footprint in over 150 countries worldwide.

LEGAL NOTICE AND TERMS OF USE: The content of the above press release was provided by the “news source” Wondershare Inc. or authorized agency, who is solely responsible for its accuracy. Send2Press® is the originating wire service for this story and content is Copr. © Wondershare Inc. with newswire version Copr. © 2017 Send2Press (a service of Neotrope). All trademarks acknowledged. Information is believed accurate, as provided by news source or authorized agency, however is not guaranteed, and you assume all risk for use of any information found herein/hereupon.