Meet Director Cheryl Toussant said, "When our youngest stars are breaking records that represent the very best of nearly a half million participants over forty years, it's a sign that track and field as a sport is still alive and well in 2015."

BROOKLYN, N.Y., Jan. 7, 2015 (SEND2PRESS NEWSWIRE) — If you missed who was likely the nation’s fastest eight year-old this time last year, no worries, she’s just broken her own record on her ninth birthday. With four decades of top talent in the Colgate Women’s Games track and field series to beat, Avery Lewis of Chester, Pa. is arguably the fastest third grader in the United States.

On Sunday, December 21, In the Elementary A division of the nation’s largest track and field series for women, Lewis of Friends Central scored a double win in the 55 meter run (7.8) and 200 meter run (30.0). At the final preliminary meet held last season at NYC’s Armory, Lewis created a three-way tie on the record books for an 8.0 performance in the 55 meters. The young sprinting sensation returned this season to the first preliminary meet at Pratt Institute in Brooklyn, and officials confirmed her 7.8 score breaks the three-way record for the fastest time in the Games’ 40 year history!

Meet Director Cheryl Toussant said, “When our youngest stars are breaking records that represent the very best of nearly a half million participants over forty years, it’s a sign that track and field as a sport is still alive and well in 2015.”

This is great news because the benefits of track and field to girls and women extend far beyond the sport including health, academic success and increased self-esteem, especially here at the Colgate Women’s Games, where participation is still completely free.”

Two more preliminary meets and a semi-final at Pratt will determine finalists who will compete at the New Balance Track and Field Center at the Armory in New York City on Saturday, February 7, 2015 where trophies and educational grants-in-aid from Colgate-Palmolive Company are awarded to top place-finishers in each age/grade division.

Coaches, recruiters, athletes, fans and press can follow scores by division and hopeful young track stars can also find information about the program at http://www.colgategames.com/.

*Photo Caption: YOUNG STARS SHINE BRIGHTEST AT 41ST ANNUAL COLGATE WOMEN’S GAMES – Nine Year-old Avery Lewis of Parkesburg, Pa. may be the nation’s fastest third grader. On her birthday (12/21), she broke her own record in the 55 meters (7.8), the fastest time in the Games’ 40 year history! 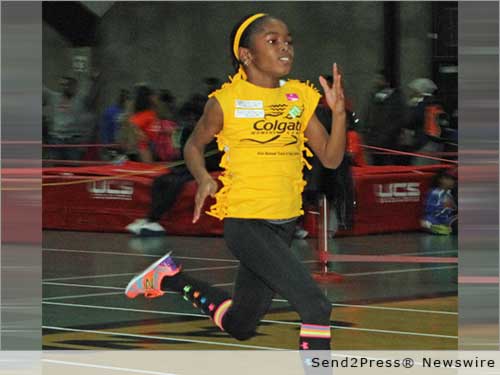 NEWS ARCHIVE NOTE: this archival news content, issued by the news source via Send2Press Newswire, was originally located in the Send2Press® 2004-2015 2.0 news platform and has been permanently converted/moved (and redirected) into our 3.0 platform. Also note the story “reads” counter (bottom of page) does not include any data prior to Oct. 30, 2016. This press release was originally published/issued: Wed, 07 Jan 2015 06:00:18 +0000

View More Brooklyn Business News
Meet Director Cheryl Toussant said, "When our youngest stars are breaking records that represent the very best of nearly a half million participants over forty years, it's a sign that track and field as a sport is still alive and well in 2015."

LEGAL NOTICE AND TERMS OF USE: The content of the above press release was provided by the “news source” Colgate Women's Games or authorized agency, who is solely responsible for its accuracy. Send2Press® is the originating wire service for this story and content is Copr. © Colgate Women's Games with newswire version Copr. © 2015 Send2Press (a service of Neotrope). All trademarks acknowledged. Information is believed accurate, as provided by news source or authorized agency, however is not guaranteed, and you assume all risk for use of any information found herein/hereupon.