"When we launched the Non-Profit PR Grants in 2000 we felt it more useful to help out an organization by using our services and expertise, over giving charities a small cash donation," says Christopher Simmons, Neotrope CEO. "More than 15 years later, we're very proud to have successfully helped many worthy causes."

TORRANCE, Calif., Oct. 23, 2015 (SEND2PRESS NEWSWIRE) — Neotrope, a 32-year-old brand marketing, PR, and content development firm, today announced the launch of its 2016 annual PR Grants program for U.S.-based 501(c)3 charities. Launched in 2000, the Non-Profit PR Grant was designed to help raise awareness of selected charities to traditional media, to the public, as well as to potential “halo” sponsors and donors.

As part of this in-kind grant program, Neotrope is providing news dissemination (through its Send2Press® Newswire service), and social media marketing for the selected applicant charities. Average value of each grant is $2,500 and will be offered to as many as 100 non-profit organizations “doing good” on a local or national level for 2016. Total potential in-kind value of the program is $250,000.

“We’ve been helping worthy causes in one form or another for over 30 years,” says Christopher Simmons, member PRSA and ASCAP, and Neotrope CEO. “When we launched the Non-Profit PR Grants in 2000 we felt it more useful to help out an organization by using our services and expertise, over giving charities a small cash donation. More than 15 years later, we’re very proud to have successfully helped many worthy causes raise awareness, raise needed funds and get media coverage with this PR Grants program.”

Simmons adds, “This year we’ve taken a slightly different approach. In prior years we ran into an issue where some charities simply never followed through to utilize all the grant deliverables, and so it was wasted. So, for 2016 we will be doing something much simpler for each charity, with less hand holding, removing the advertising component — but making it available to a much larger pool of worthy causes.”

There is no fee to apply, and applications are being accepted now through Jan. 1, 2016 at http://prgrants.com/. Complete grant requirements and disclaimers can be found on the grants website.

About Neotrope:
Since 1983 Neotrope® has delivered services to raise organization awareness including brand identity, marketing, public relations (PR), and social media services. Neotrope is also an entertainment publishing company involved in books, music, software, and online magazines. The company has been at the forefront of many communication and technology movements for over three decades. Neotrope was an Inc. 5000 company in 2009, has an A+ rating with the BBB, and is a member of GS1. Information: http://Neotrope.com/.

Grant recipients are selected by Neotrope/Send2Press staff based on qualified applications filled out and submitted by U.S. based non-profit orgs. Choices for grant recipients are both subjective, and based on overall activities and actual need, as well as best fit for support from the marketing team.

Neotrope is a registered trademark in the U.S. and Europe. Send2Press is a reg. TM of Neotrope. Non-Profit PR Grant is a trademark of Neotrope. 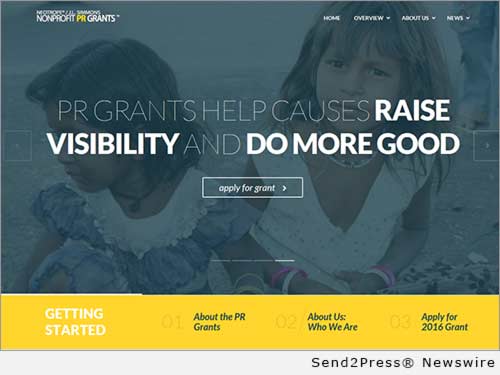 NEWS ARCHIVE NOTE: this archival news content, issued by the news source via Send2Press Newswire, was originally located in the Send2Press® 2004-2015 2.0 news platform and has been permanently converted/moved (and redirected) into our 3.0 platform. Also note the story “reads” counter (bottom of page) does not include any data prior to Oct. 30, 2016. This press release was originally published/issued: Fri, 23 Oct 2015 06:00:32 +0000

View More Advertising and Marketing News
"When we launched the Non-Profit PR Grants in 2000 we felt it more useful to help out an organization by using our services and expertise, over giving charities a small cash donation," says Christopher Simmons, Neotrope CEO. "More than 15 years later, we're very proud to have successfully helped many worthy causes."

LEGAL NOTICE AND TERMS OF USE: The content of the above press release was provided by the “news source” Neotrope or authorized agency, who is solely responsible for its accuracy. Send2Press® is the originating wire service for this story and content is Copr. © Neotrope with newswire version Copr. © 2015 Send2Press (a service of Neotrope). All trademarks acknowledged. Information is believed accurate, as provided by news source or authorized agency, however is not guaranteed, and you assume all risk for use of any information found herein/hereupon.