Quik Pod Keeps You in The Picture!

TORONTO, Ontario, Dec. 14 (SEND2PRESS NEWSWIRE) — If you’re the photographer in the family the best photo of yourself is likely on your driver’s license. With the Quik Pod® from Fromm Works, Inc., the patented and world’s first handheld extendable tripod, the days of holding out your arm only to get poor picture results are over. No more asking strangers for help. A person simply holds the extended Quik Pod® with camera attached and properly framed photos and videos are captured without the help of strangers.

The Quik Pod® invention came to Wayne Fromm when he was traveling with his family. He was growing tired of asking strangers to operate his camera for family photos. Fromm has invented and marketed nearly fifty successful commercial products and is particularly known for his toy creations including Disney’s “Beauty and the Beast Talking Mirror.” Over one hundred prototypes were created before he successfully manufactured the world’s first pocket-size extendable, handheld tripod for digital cameras, camcorders, and iPhones.

The Quik Pod® is made of the same material as airplane parts to achieve strength and a weight of less than 3.5 ounces. It comes with a built-in self-positioning mirror to help frame each shot. Retailing at less than $30.00, the Quik Pod® Pro+ includes a lightweight tripod leg adapter and is designed for point-and-shoot cameras, camcorders, waterproof cameras and for remote lighting. The Quik Pod® converts from handheld use to tabletop in seconds.

“Families on vacation, YouTube and Facebook users, will all benefit by making picture taking and movie making easier. Professionals are using the Quik Pod for photo and lighting solutions,” says Fromm.

The Quik Pod DSLR® for professional cameras retails for $49.95, and is super tough as seen in an online video showing it survive the torture test of it being run over by a 10,000-pound truck. (Link to video: http://www.youtube.com/watch?v=5GfWLiz4w-8 .)

About Fromm Works, Inc.:
Fromm Works has invented and marketed nearly fifty successful commercial products. Company President Wayne Fromm is a prolific inventor and entrepreneur with a number of patented inventions to his credit. His creations include such hits as the patented “Disney’s The Beauty and the Beast Magic Talking Mirror,” “Crayola’s Color and Show Projector,” “Saban’s Power Ranger Room Defender” and “Nestle’s Nesquik Magic Milkshake Maker.” His company co-marketed “Crazy Bones” a popular collectible that was featured as a McDonald’s Happy Meal. 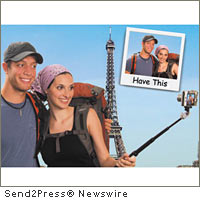 NEWS ARCHIVE NOTE: this archival news content, issued by the news source via Send2Press Newswire, was originally located in the Send2Press® 2004-2015 2.0 news platform and has been permanently converted/moved (and redirected) into our 3.0 platform. Also note the story “reads” counter (bottom of page) does not include any data prior to Oct. 30, 2016. This press release was originally published/issued: Tue, 14 Dec 2010 10:59:51 +0000

LEGAL NOTICE AND TERMS OF USE: The content of the above press release was provided by the “news source” Fromm Works Inc. or authorized agency, who is solely responsible for its accuracy. Send2Press® is the originating wire service for this story and content is Copr. © Fromm Works Inc. with newswire version Copr. © 2010 Send2Press (a service of Neotrope). All trademarks acknowledged. Information is believed accurate, as provided by news source or authorized agency, however is not guaranteed, and you assume all risk for use of any information found herein/hereupon.