LOS ANGELES, Calif., Feb. 16 (SEND2PRESS NEWSWIRE) — California PR firm, Neotrope®, is honored to make World Savvy its third chosen recipient for 2011 of its semi-annual Non-Profit PR Grants Program. With this commitment, Neotrope aligns itself with World Savvy’s mission to educate and engage youth in community and world affairs, to prepare the next generation of leaders to learn, work and thrive as responsible global citizens in the 21st century.

As part of this grant program, Neotrope is providing PR solutions, news dissemination, and search marketing for World Savvy to help raise awareness to both media and the public regarding their programs, sponsors, partners and other activities. In 2009, World Savvy (WS) was also a recipient of Neotrope’s PR Grants program. Neotrope/Send2Press is also promoting WS to its customers and other partners in order to bring additional resources together to help WS widen its awareness in the small to medium business space.

“Neotrope has played an important role in our success in the last couple years,” stated Dana Mortenson, Executive Director of World Savvy. “The PR Service Grant in 2009 was tremendously helpful in a critical year of our growth. With Neotrope’s help spreading the word for our youth engagement programs, we were able to engage more than 6,000 youth and 1,100 educators in our programs during the 2009-2010 school year. The announcement about our annual Gala in September 2009, which Neotrope assisted us to distribute prior to the event, helped bring an incredibly generous crowd to the event, which raised a record $140,000. We are grateful for Neotrope’s contribution and look forward to growing our partnership.”

“We’ve been honored in providing assistance for World Savvy, and their work with dynamic youth engagement and teacher training programs that focus on the integration of global content in teaching and learning across disciplines,” said Neotrope CEO, Christopher Laird Simmons; a member of PRSA and ASCAP. “Hopefully our efforts have, and will continue, in some small way to help more people learn about World Savvy and their programs.”

Additional information regarding the 2011 PR Grants for U.S. charitable non-profits can be found at: https://www.send2press.com/non-profit/index.shtml .

About World Savvy:
World Savvy’s mission is to educate and engage youth in community and world affairs, to prepare the next generation of leaders to learn, work and live as responsible global citizens in the 21st century.

A 501(c)(3) not-for-profit corporation, World Savvy was founded in San Francisco by Dana Mortenson and Madiha Murshed in response to a critical need for youth to acquire global knowledge and 21st century skills within the conspicuous absence of global education programs in K-12 education in the United States. World Savvy’s dynamic academic and arts programs for youth and professional development services for educators help youth in middle and high school learn how to think rather than what to think about critical global and community issues, which are often complex and unaddressed in school, and have enormous implications for their local community.

These programs support systemic change in K-12 education, providing every student in every classroom with the content knowledge, skills, values and attitudes to be leaders and change makers in their diverse communities, locally and globally. Since founding, the organization has grown from serving 90 students and 20 teachers, to serving more than 6,000 youth and 1,100 teachers annually from three offices nationally: San Francisco, Minneapolis-St. Paul and New York. Cumulatively, World Savvy has worked with more than 10,000 youth and 1,400 educators in its nine-year history. More information: http://www.worldsavvy.org .

Upcoming Event:
Join World Savvy on March 5, 2011, as students from 24 schools around the Twin Cities of Minneapolis-St. Paul present their research and solutions to some of today’s most pressing issues related to food.

For more information, go to:
http://worldsavvy.org/events/minnesotas-third-annual-world-affairs-challenge/ .

About Neotrope:
Since 1983 Neotrope® has delivered services to raise organization awareness including brand identity, marketing, public relations (PR), and SEO services. Neotrope is also an entertainment publishing company involved in books, music, software, and online portals. The company pioneered the concept of search optimization of press release content back in 1997. Neotrope was an Inc. 5000 company in 2009. More information: http://www.Neotrope.com . 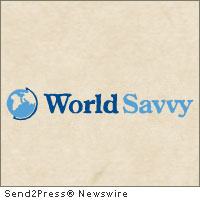 Alternate Headline: Neotrope aligns itself with World Savvy’s mission to educate and engage youth in community and world affairs

NEWS ARCHIVE NOTE: this archival news content, issued by the news source via Send2Press Newswire, was originally located in the Send2Press® 2004-2015 2.0 news platform and has been permanently converted/moved (and redirected) into our 3.0 platform. Also note the story “reads” counter (bottom of page) does not include any data prior to Oct. 30, 2016. This press release was originally published/issued: Wed, 16 Feb 2011 21:42:53 +0000

LEGAL NOTICE AND TERMS OF USE: The content of the above press release was provided by the “news source” Neotrope or authorized agency, who is solely responsible for its accuracy. Send2Press® is the originating wire service for this story and content is Copr. © Neotrope with newswire version Copr. © 2011 Send2Press (a service of Neotrope). All trademarks acknowledged. Information is believed accurate, as provided by news source or authorized agency, however is not guaranteed, and you assume all risk for use of any information found herein/hereupon.