HOLLYWOOD, Calif., April 13 (SEND2PRESS NEWSWIRE) — “The Beat Hotel,” the non-fiction book by Barry Miles (ISBN: 978-1903809587, Grove, 2000), about American Beat Era icons creating groundbreaking art, literature and lifestyles in a legendary hotel in Paris, 1957-1963, has been optioned by producer Pamela Dickerson for development as a narrative feature film. Pamela has teamed with Rex Weiner, a journalist and playwright, to co-produce and develop the property.

Publishers Weekly’s review of “The Beat Hotel” said: “Part scholarly study and part gossip-fest, this account traces the aesthetic, sexual and social goings-on in Paris: ‘Within the shelter of the Beat Hotel,’ Miles writes, ‘they had mapped out many of the paths that the Sixties Generation was to actually follow: the recreational use of drugs and experiments with psychedelics…, investigations into magic and mysticism…, gay rights and sexual freedom, the legalization of pornography and challenges to obscenity laws.'”

Pamela said, “From the moment I read Miles’ book I was totally enamored. Paris in that era provided freedom from the rampant conformism of the U.S., and 9 rue Git-le-Coeur was a sanctuary for Allen Ginsberg, Gregory Corso, William Burroughs, and Brion Gysin, to explore humanity and passionate creative expression. With locations in Paris, Amsterdam, Italy, Germany, including vignettes of Jack Kerouac in, New York, San Francisco, and Morocco, and a soundtrack tuned to the jazz greats of the time, film will be a stylistic bi-lingual cultural reve.”

Pamela teamed with Rex Weiner on “The Beat Hotel” project after the production of “Waiting For Jack,” a stage-play co-created and co-produced by Weiner about Beat Era poets. “His stage and screen credits and extensive cultural journalism make him a natural fit for ‘The Beat Hotel,'” she said.

The producing group is now putting the project out to directors and talent, as well as sales agents in advance of the upcoming Cannes Film Market.

About Pamela Dickerson:
Pamela Dickerson gained her interest for the lives and times of the Beat Era while on stage as an American actress in Paris with The Actor’s Group, performing leads in Mamet’s “All Men Are Whores,” Joyce Carol-Oats’ “I Stand Before You Naked,” KoltÃ¨s’ “Roberto Zucco” and a Sam Shepard series for Radio France Culture, directed by Robert Cordier, the Belgian / English playwright who was an intimate of the Beats, and French translator, also of Allen Ginsberg’s “Howl.” Her screen credits include Oliver Stone’s “Nixon,” and” The Last Big Thing” in which she played opposite Mark Ruffalo. Pamela was nominated Best New Director for “Just Another Day In New York” at the New York International Independent Film & Video Festival, a feature film in which she also acted, co-wrote and shot. Recently she co-produced “The Guru & The Gypsy” with Philippe Caland.

About Rex Weiner:
As a journalist, Weiner’s first stories appeared in the East Village Other, one of the original “underground papers” of the 1960s. His articles have appeared in Vanity Fair, the Los Angeles Times Sunday Magazine, the New Yorker, New York Observer, LA Weekly and Rolling Stone Italia. Weiner’s screenwriting credits include “The Adventures Of Ford Fairlane” (20th Century Fox) and “Forgotten Prisoners: The Amnesty Files,” among the first of TNT’s original feature-length movies. As one of the first writers brought on board to launch the TV series “Miami Vice,” Weiner wrote the now classic 9th episode, “Glades.” He is one of the founding editors of High Times Magazine and co-author of “The Woodstock Census” (ISBN: 0670782068, Viking, 1979), one of the key texts analyzing the impact of the Sixties Generation on American society. The writer/director of several plays, Rex most recently co-created and co-produced “Waiting For Jack,” a celebrated staged reading by an array of top Los Angeles poets of works by poets of the Beat Era. 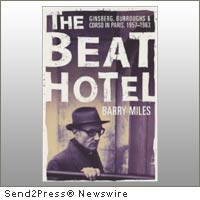 NEWS ARCHIVE NOTE: this archival news content, issued by the news source via Send2Press Newswire, was originally located in the Send2Press® 2004-2015 2.0 news platform and has been permanently converted/moved (and redirected) into our 3.0 platform. Also note the story “reads” counter (bottom of page) does not include any data prior to Oct. 30, 2016. This press release was originally published/issued: Wed, 13 Apr 2011 18:39:23 +0000

LEGAL NOTICE AND TERMS OF USE: The content of the above press release was provided by the “news source” Rex Weiner or authorized agency, who is solely responsible for its accuracy. Send2Press® is the originating wire service for this story and content is Copr. © Rex Weiner with newswire version Copr. © 2011 Send2Press (a service of Neotrope). All trademarks acknowledged. Information is believed accurate, as provided by news source or authorized agency, however is not guaranteed, and you assume all risk for use of any information found herein/hereupon.