LOS ANGELES, Calif., May 30, 2013 (SEND2PRESS NEWSWIRE) — Marking the 23rd anniversary of “The Adventures of Ford Fairlane,” the controversial 1990 motion picture released by 20th Century Fox, directed by Renny Harlin, and starring Andrew Dice Clay, indie e-Book publisher Cultmachine is offering Ford Fairlane fans for the first time the original stories on which the movie was based.

“The Adventures of Ford Fairlane” (ISBN: 978-0-9840327-6-1), unavailable since first publication in 1980 as serialized weekly episodes in the New York Rocker and the LA Weekly, the stories were written by journalist and screenwriter Rex Weiner. In the two gritty tales, private eye Ford Fairlane, the music industry’s “rock n roll detective,” solves cases involving the punk rock and new wave scenes in New York City and Los Angeles in the late-1970’s.

The stories are offered at http://www.cultmachine.com/ in a single e-Book edition for $4.99 via Amazon Kindle Direct Publishing.

“The Adventures of Ford Fairlane has become a cult classic with a dedicated fan-base around the world,” said Rex Weiner. “I’m pleased that Cultmachine, in response to many requests, is offering these stories in which I created the character played on the big screen by Andrew Dice Clay.”

About Cultmachine:
Cultmachine ( www.cultmachine.com ) is the brainchild of filmmakers and writers Andreas Kossak and John Huff. It is an independent e-publishing label where writers help each other succeed and retain full control of their work. With a focus on cult audiences, this label presents e-Books of movie-related fiction and non-fiction, screenplays, and all those exciting works which go beyond the strict confines of commercial publishers.

Cultmachine also publishes a webzine, “Cultnik,” featuring articles, interviews, and essays written from the perspective of curious fans and readers who are interested in who and what they like – as in “worship,” the original meaning of the Latin word “cultus.” 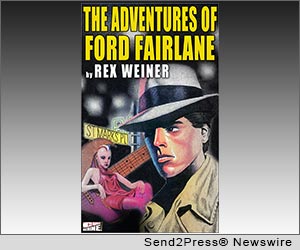 NEWS ARCHIVE NOTE: this archival news content, issued by the news source via Send2Press Newswire, was originally located in the Send2Press® 2004-2015 2.0 news platform and has been permanently converted/moved (and redirected) into our 3.0 platform. Also note the story “reads” counter (bottom of page) does not include any data prior to Oct. 30, 2016. This press release was originally published/issued: Thu, 30 May 2013 07:00:00 +0000

View More Books and Publishing News
"The Adventures of Ford Fairlane has become a cult classic with a dedicated fan-base around the world," said author Rex Weiner. "I'm pleased that Cultmachine, in response to many requests, is offering these stories in which I created the character played on the big screen by Andrew Dice Clay."

LEGAL NOTICE AND TERMS OF USE: The content of the above press release was provided by the “news source” Rex Weiner or authorized agency, who is solely responsible for its accuracy. Send2Press® is the originating wire service for this story and content is Copr. © Rex Weiner with newswire version Copr. © 2013 Send2Press (a service of Neotrope). All trademarks acknowledged. Information is believed accurate, as provided by news source or authorized agency, however is not guaranteed, and you assume all risk for use of any information found herein/hereupon.