BUFFALO, N.Y., April 15 (SEND2PRESS NEWSWIRE) — Whether one is mountain climbing in Spain, paragliding in Switzerland or at a family gathering the Quik Pod® Mobile, developed by Fromm Works, allows the photographer to be included and properly centered in photos and videos taken on an iPhone® or other smartphones. A person simply holds the extended Quik Pod® and Quik Pod Mobile, with a smartphone attached, and properly framed photos and videos are captured without the help of strangers.

The Quik Pod Mobile Smartphone Tripod Adapter takes self-portrait photography to new heights. Weighing in at less than 2 ounces yet offering up to 25 lbs of grip power for a worry free hold on the smartphone. The Quik Pod Mobile holds all present and future iPhones, with similar dimensions, including 3G/3GS, 4, all iPod touch models, HTC EVO, Samsung, Blackberry and all popular smartphones. It adapts smartphones to a standard 1/4-inch x 20 tripod screw and with the use of available self-timer apps such as “Self Image” for face recognition and timer countdown allows the photographer to be easily and professionally included in shots. The unique adjustable thumbwheel width control allows many smartphone cases to remain attached for convenience.

The Quik Pod Mobile+ (www.quikpod.com/iphone.asp) converts to a tabletop tripod stand for handsfree video calls with Face Time and Skype Video. Great for use in home and business applications for convenient and precise smartphone positioning for remote surveillance of home, baby, dog or office using apps such as “iCam.” It’s also ideal for in-flight viewing of movies when placed on a tray table. A charger pass through slot allows the user’s charging cord to stay connected to the smartphone while in operation.

The original Quik Pod (www.quikpod.com/home.asp) has appeared on Oprah’s O List and the Today Show and is covered under U.S. Patent 7,684,694. Available for point-and-shoot cameras, DSLR and smartphones.

The Quik Pod Mobile can be viewed in use at http://www.youtube.com/watch?v=69xZ7LfgQVU and images can be downloaded at http://www.quikpod.com/Press.asp. Press samples are available to accredited reporters.

About Fromm Works, Inc.:
Fromm Works, Inc. is an invention and design company that has marketed nearly fifty successful commercial products. Company President Wayne Fromm is an inventor and entrepreneur with a number of patented inventions to his credit including such hits as “Disney’s The Beauty and the Beast Talk ‘N View Mirror,” “Crayola’s Color and Show Projector” and “Nestle’s Nesquik Magic Milkshake Maker.” 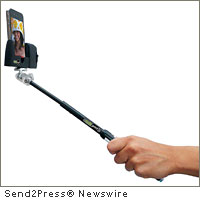 Alternate Headline: Get Your Face In No Matter Where You Are: iPhone Photos Improved with NEW Quik Pod Mobile

NEWS ARCHIVE NOTE: this archival news content, issued by the news source via Send2Press Newswire, was originally located in the Send2Press® 2004-2015 2.0 news platform and has been permanently converted/moved (and redirected) into our 3.0 platform. Also note the story “reads” counter (bottom of page) does not include any data prior to Oct. 30, 2016. This press release was originally published/issued: Fri, 15 Apr 2011 08:58:17 +0000

LEGAL NOTICE AND TERMS OF USE: The content of the above press release was provided by the “news source” Fromm Works Inc. or authorized agency, who is solely responsible for its accuracy. Send2Press® is the originating wire service for this story and content is Copr. © Fromm Works Inc. with newswire version Copr. © 2011 Send2Press (a service of Neotrope). All trademarks acknowledged. Information is believed accurate, as provided by news source or authorized agency, however is not guaranteed, and you assume all risk for use of any information found herein/hereupon.