NEW YORK, N.Y., June 1, 2011 (SEND2PRESS NEWSWIRE) — A naked Osama Bin Laden, laden with sea crabs and shackled to a U.S. Navy SEALs cement block at the bottom of the sea receives its official title, courtesy of the friends on Facebook. The Osama Bin Laden sculpture is the latest by New York artist Daniel Edwards, and is being unveiled this week on Facebook, announces Cory Allen Contemporary Art.

“As soon as it was announced that Washington would not release actual death photos of Osama Bin Laden, I went to work, motivated by patriotism,” said Daniel Edwards about the sculpture, which started out as a Facebook friend request. “I was sure some of the general public still needed the closure those photos could bring, so I felt that providing a carefully rendered image of a dead Osama Bin Laden could be a meaningful supplement for those having difficulty creating their own mental picture.”

The Bin Laden representation also displays crustaceans mating on his pelvic region and hanging from his nipples in reference to the discovery of his secret stash of pornography, according to the artist’s representative.

The title was selected from a couple dozen suggestions solicited from friends on Facebook. Martin Newman and Paige Fessenden came up with the winning titles.

Previous works by Daniel Edwards, such as “Monument to Pro-Life” featuring a nude Britney Spears giving birth on a bearskin rug, and “Paris Hilton Autopsy” can be viewed at the artist’s Facebook account: www.facebook.com/officialdanieledwards . 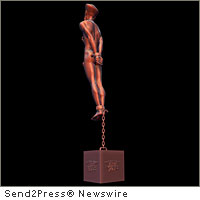 NEWS ARCHIVE NOTE: this archival news content, issued by the news source via Send2Press Newswire, was originally located in the Send2Press® 2004-2015 2.0 news platform and has been permanently converted/moved (and redirected) into our 3.0 platform. Also note the story “reads” counter (bottom of page) does not include any data prior to Oct. 30, 2016. This press release was originally published/issued: Wed, 01 Jun 2011 17:06:20 +0000

LEGAL NOTICE AND TERMS OF USE: The content of the above press release was provided by the “news source” Cory Allen Contemporary Art or authorized agency, who is solely responsible for its accuracy. Send2Press® is the originating wire service for this story and content is Copr. © Cory Allen Contemporary Art with newswire version Copr. © 2011 Send2Press (a service of Neotrope). All trademarks acknowledged. Information is believed accurate, as provided by news source or authorized agency, however is not guaranteed, and you assume all risk for use of any information found herein/hereupon.