DALLAS, Texas, Aug. 9, 2011 (SEND2PRESS NEWSWIRE) — Despite breakup rumors, Teen Choice Award winners Justin Bieber and Selena Gomez are presented as a 21st Century Adam and Eve in a new life size portrait created by controversial American artist Daniel Edwards. The portrait depicts the teenagers almost entirely nude, with a Canadian maple leaf and a Texas lone star covering their most intimate parts. The portrait will be unveiled at Dallas’s New Fine Arts, near Gomez’s hometown, at a time yet to be announced by Cory Allen Contemporary Art.

“Justin and Selena as One” features the “Adam and Eve” couple conjoined at the torso, each seeming to emerge from the other’s rib. Together, they have three legs, sharing Selena’s right leg as she appears to lead the younger Justin toward “Eden.” The pair is being led by an amorous Canada goose and Texas armadillo.

The portrait, partly inspired by Canadian Justin Bieber’s boasts of Canada’s successful single payer national health care system, “should be considered for installation at Canadian Embassies around the globe as a symbol of Canada’s prowess in the areas of art and commerce,” according to Edwards.

“Justin and Selena joined together, symbolizes the great harmony between neighboring countries Canada and The United States,” said spokesman Cory Allen. “Countries like North Korea and South Korea could learn from our example. It would be nice to exhibit this portrait in the areas of the world where tensions are high between countries that share borders.”

“The portrait represents both Canadian exceptionalism and Texas-American exceptionalism, but I believe Justin and Selena would ultimately choose Canada for their Garden of Eden, because Canada’s Medicare and AAA credit rating make it easier for young couples who may find themselves in the family way,” said Edwards.

Artist Exposes Bieber’s “Private Parts” in Exhibit:
A companion artwork, “Allegory of a Teen Sex Symbol (Justin Bieber),” shows the hidden private parts of Bieber atop a Canadian maple leaf in a manner inspired by renaissance painter Giuseppe Acrimboldo and sixties rock star groupie Cynthia Plaster Caster. “The Bieber genitalia are artistically symbolized, not depicted,” says Allen. “Daniel wanted to create a work that opens a dialogue about the inevitable exploitation of teen sex symbols as they grow from child stars to adults, like we’ve seen with past celebutantes Lindsay, Miley, and Britney.”

The artist’s portrayal of Bieber’s pelvic organ will be shown with a bootleg plaster cast of Jimi Hendrix’s private parts at Dallas’s New Fine Arts, located at 1966 W. Northwest Hwy. 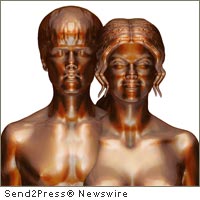 Alternate Headline: New art from Daniel Edwards: Justin and Selena as ‘One’ in Canadian ‘Garden of Eden’

NEWS ARCHIVE NOTE: this archival news content, issued by the news source via Send2Press Newswire, was originally located in the Send2Press® 2004-2015 2.0 news platform and has been permanently converted/moved (and redirected) into our 3.0 platform. Also note the story “reads” counter (bottom of page) does not include any data prior to Oct. 30, 2016. This press release was originally published/issued: Tue, 09 Aug 2011 17:09:33 +0000

LEGAL NOTICE AND TERMS OF USE: The content of the above press release was provided by the “news source” Cory Allen Contemporary Art or authorized agency, who is solely responsible for its accuracy. Send2Press® is the originating wire service for this story and content is Copr. © Cory Allen Contemporary Art with newswire version Copr. © 2011 Send2Press (a service of Neotrope). All trademarks acknowledged. Information is believed accurate, as provided by news source or authorized agency, however is not guaranteed, and you assume all risk for use of any information found herein/hereupon.