NEW YORK, N.Y., Sept. 27, 2011 (SEND2PRESS NEWSWIRE) — Blue Hill Troupe, Ltd. (www.bht.org), the only musical theater group in New York City to donate its net proceeds to charity, launches its 88th season with the musical farce A Funny Thing Happened on the Way to the Forum. With a score by Stephen Sondheim and book by Burt Shevelove and Larry Gelbart, Forum will run from October 28 through November 5, 2011 at Theatre at St. Clement’s, 423 West 46th Street.

The Blue Hill Troupe produces a musical every fall and a Gilbert & Sullivan operetta every spring, and has donated over $3 million to local charities since its inception in 1924. Proceeds from Forum will benefit the “I Have A Dream” Foundation® – New York Metro Area (IHDF-NY) (www.ihaveadreamfoundation-ny.org).

WHAT: A FUNNY THING HAPPENED ON THE WAY TO THE FORUM.

“Tragedy tomorrow, comedy tonight!” Broadway’s greatest farce is light, fast-paced, witty, irreverent and one of the funniest musicals ever written – the perfect escape from life’s troubles. Forum takes comedy back to its roots, combining situations from the time-tested, 2000 year-old comedies of Roman playwright Plautus with the infectious energy of classic vaudeville. The result is a non-stop laugh-fest in which a crafty slave struggles to win the hand of a beautiful but slow-witted courtesan for his young master, in exchange for freedom.

WHERE: Theatre at St. Clement’s, 423 West 46 Street (between 9th & 10th Avenues). Please note: no elevator access to the theater; stairs must be negotiated.

Andy Sandberg directs, with musical direction by Eric Peterson and choreography by Janet Bushor. The Blue Hill Troupe has presented five other works by Stephen Sondheim: Into the Woods (2008), Sweeney Todd (2001), Company (2000), A Little Night Music (1993), and Follies (2005), which was honored by BroadwayWorld.com as “Semi-professional theatre at its finest.”

The Blue Hill Troupe is proud to partner with the “I Have A Dream” Foundation – New York Metro Area for the 2011-2012 season. For over thirty years, IHDF-NY has been sponsoring entire grade levels of students in under-resourced public schools and housing developments, and working with these “Dreamers” from early elementary school all the way through to college. Upon high school graduation, each Dreamer receives guaranteed tuition assistance for higher education. By helping Dreamers gain access to college, IHDF-NY is putting them on a different academic and life trajectory, while having a broader impact on the students’ families and the generations that follow. 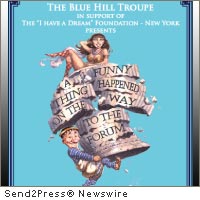 Alternate Headline: Blue Hill Troupe, Ltd. launches its 88th season with the musical farce ‘A Funny Thing Happened on the Way to the Forum’

NEWS ARCHIVE NOTE: this archival news content, issued by the news source via Send2Press Newswire, was originally located in the Send2Press® 2004-2015 2.0 news platform and has been permanently converted/moved (and redirected) into our 3.0 platform. Also note the story “reads” counter (bottom of page) does not include any data prior to Oct. 30, 2016. This press release was originally published/issued: Tue, 27 Sep 2011 18:37:50 +0000

I Have A Dream Foundation

LEGAL NOTICE AND TERMS OF USE: The content of the above press release was provided by the “news source” Blue Hill Troupe or authorized agency, who is solely responsible for its accuracy. Send2Press® is the originating wire service for this story and content is Copr. © Blue Hill Troupe with newswire version Copr. © 2011 Send2Press (a service of Neotrope). All trademarks acknowledged. Information is believed accurate, as provided by news source or authorized agency, however is not guaranteed, and you assume all risk for use of any information found herein/hereupon.