NEW YORK, N.Y., Oct. 4, 2011 (SEND2PRESS NEWSWIRE) — The Pit Stop Players, a thirteen-member instrumental ensemble composed of veteran Broadway pit musicians, will kick off their third season with a concert at the DiMenna Center for Classical Music on Sunday, October 30, 2011 at 7:00 p.m. The critically acclaimed group will offer creepy-themed music the night before Halloween, in a program titled “Dark Side of the Tune.”

“I’ve always had a soft spot for music that scares the living daylights out of people,” said Joshua Rosenblum, the group’s founder and music director, “So we’ll be ushering in Halloween with a few choice terrifying tunes. And if the music doesn’t frighten anyone, my Michele Bachmann mask will.”

Instead of traditional Halloween concert fare, such as “Night on Bald Mountain” and “The Sorcerer’s Apprentice,” the concert will include evocative but lesser-known creations by Bolcom, Ives, Prokofieff and Schubert, as well as five works composed especially for the occasion. The new offerings include pieces by Gary William Friedman (The Me Nobody Knows, The Electric Company), Josh Schmidt (Adding Machine, The Minister’s Wife), Michael Starobin (Orchestrator: Sunday in the Park with George, Next to Normal), and the conductor’s 15-year-old son, Julian Rosenblum, in his professional debut.

Rosenblum, who founded the Pit Stop Players in 2009 as a means of giving Broadway musicians a chance to climb out of the pit and take center stage, says that nearly any genre is fair game for their programs, including traditional and contemporary classical, jazz, rock, fusion, and film music. However, the primary emphasis is on new compositions and arrangements, written and orchestrated specifically for the group.

The players will be in Halloween costumes, and audience members are encouraged to come dressed for the occasion as well.

Composer, conductor and pianist Joshua Rosenblum has led the orchestras for thirteen Broadway and Off Broadway shows, including Wonderful Town, Chitty Chitty Bang Bang, The Music Man, Miss Saigon and Dr. Seuss’s How the Grinch Stole Christmas. He is also the composer/creator of BUSH IS BAD, the hit Off Broadway satirical revue, and the composer/co-lyricist of Fermat’s Last Tango, Einstein’s Dreams, Garbo and Me, and the forthcoming The Haunted Hotel.

His instrumental music has been recorded on two CDs: Impetuosities and Sundry Notes, both on the Albany Records label.

Rosenblum has written pieces on commission for Philip Smith, principal trumpeter of the New York Philharmonic; Ethel, America’s premier post-classical string quartet; and the Chase Brock Experience dance troupe, among many others. He teaches Composing for Musical Theater at Yale University, his alma mater, and was recently awarded a grant from the Signature Theatre in Washington, D.C., as part of the American Musical Voices Project: The Next Generation. 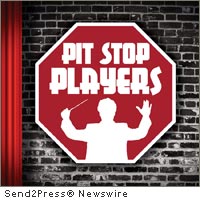 Alternate Headline: Dark Side of the Tune: creepy themed concert in NYC from The Pit Stop Players

NEWS ARCHIVE NOTE: this archival news content, issued by the news source via Send2Press Newswire, was originally located in the Send2Press® 2004-2015 2.0 news platform and has been permanently converted/moved (and redirected) into our 3.0 platform. Also note the story “reads” counter (bottom of page) does not include any data prior to Oct. 30, 2016. This press release was originally published/issued: Tue, 04 Oct 2011 11:50:00 +0000

LEGAL NOTICE AND TERMS OF USE: The content of the above press release was provided by the “news source” Pit Stop Players or authorized agency, who is solely responsible for its accuracy. Send2Press® is the originating wire service for this story and content is Copr. © Pit Stop Players with newswire version Copr. © 2011 Send2Press (a service of Neotrope). All trademarks acknowledged. Information is believed accurate, as provided by news source or authorized agency, however is not guaranteed, and you assume all risk for use of any information found herein/hereupon.