WASHINGTON, D.C., July 30, 2019 (SEND2PRESS NEWSWIRE) — Guardian Angels Medical Service Dogs is excited to announce that on Friday, July 26, 2019 our Service Dog, Alice; specifically trained to assist Recipient Antonio was named the 2019 Service Dog Hero of the Year by more than 900,000 nationwide voters and the American Humane Societies’ panel of judges. 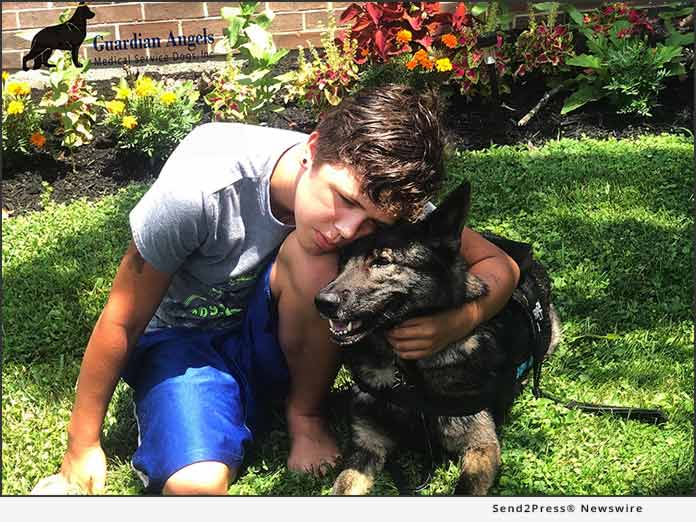 Alice has been watching over Antonio since 2016, after he tragically suffered a gun-shot wound to the head at the age of nine, while sitting in his parents’ car in 2015.

Since that day, Antonio has struggled through 5 brain surgeries, leaving him with a permanent traumatic brain injury, and an artificial flap that covers a large portion of his skull. He suffers regularly from seizures, spells, migraines and balance issues. Alice is at Antonio’s side constantly, including attending school together; and she is focused on Antonio at all times. She not only alerts to oncoming seizures and spells, but assists him with balance issues, as a fall could potentially be fatal.

Antonio’s mom Tara says: “Alice is a hero in our eyes because without her, Antonio would not be able to do the simple things in life we take for granted, like going to school, the store, or even just walking outside. She has never once failed in alerting and has saved Antonio’s life many times. Alice has given Antonio a chance at a new normal life he did not have without her. The life that was ripped away for no reason. She has NEVER let him down. If that is not a hero, I don’t know what is.”

Now that Guardian Angels, Alice has claimed the top spot in the Service Dog Category, in October, Antonio and Alice will head to California, to take part in the LIVE 2019 Hero Dog Awards, being broadcast on the Hallmark Channel, to compete with the 6 other category winners for the title of “Hero Dog of the Year.”

Voting will be open until September 9, 2019, and you can visit http://herodogawards.org/dog/alice/ to read their full story, and show them support with your vote!

Guardian Angels, a 501(c)(3) non-profit, was founded in 2010, and custom-trains medical service dogs for veterans, first-responders and individuals like Antonio. Although the cost of training each service dog can take up to 2 full years, and cost nearly $25,000, we donate each dog to the recipient at no cost. We receive no federal or state funding. Everything we do is funded completely by private and foundation donations. To date, we have paired over 320 service dogs in 23 states across the nation.

If you would like to learn more about our organization, or become a supporter, visit our website at https://www.medicalservicedogs.org/.

View More NonProfit and Charities News
Antonio's mom Tara says: "Alice is a hero in our eyes because without her, Antonio would not be able to do the simple things in life we take for granted, like going to school, the store, or even just walking outside."

Guardian Angels Medical Service Dogs is a 501(c) 3 based in Williston, Florida and has grown into a nation-wide Service Dog Organization. We raise, train and then donate individually trained medical service dogs to veterans, first responders and others who suffer from disabilities including PTS, Traumatic Brain Injury, mobility issues and more. Guardian Angels receives up to 40 applications each day for one of their medical Service Dogs. There is no state or federal funding available for this critical life-saving program. Over the past 6 years, Guardian Angels has paired more than 200 individually trained medical service dogs with those in need, and with your help, they can do even more.

LEGAL NOTICE AND TERMS OF USE: The content of the above press release was provided by the “news source” Guardian Angels Medical Service Dogs Inc. or authorized agency, who is solely responsible for its accuracy. Send2Press® is the originating wire service for this story and content is Copr. © Guardian Angels Medical Service Dogs Inc. with newswire version Copr. © 2019 Send2Press (a service of Neotrope). All trademarks acknowledged. Information is believed accurate, as provided by news source or authorized agency, however is not guaranteed, and you assume all risk for use of any information found herein/hereupon.