LANSING, Mich., Aug. 23, 2019 (SEND2PRESS NEWSWIRE) — Guardian Angels Medical Service Dogs announced that in February 2019, Sgt. McRae of the Michigan State Police Trooper Recruit School set a goal: to honor Michigan State Trooper Craig A. Scott; a military veteran who was killed in the line of duty after 7 years on the force in 1982. 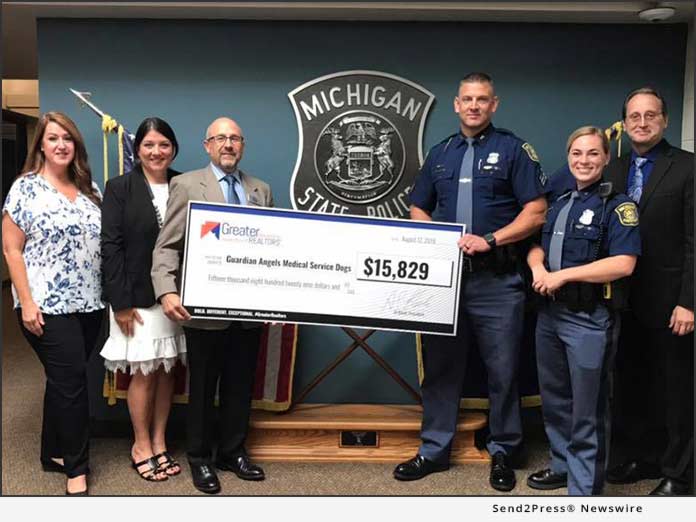 Each recruit class creates a Hero WOD (workout of the day) for a fellow trooper and performs the Hero WOD at the gym.  This 135th trooper recruit school added a fundraiser with an ambitious goal. To raise $25,000 to sponsor the training of a medical service dog for a deserving recipient.

The members of the 135th Trooper Recruit School were well on their way to that goal, raising $9,200 during a Hero WOD. That’s when GMAR (The Greater Metropolitan Association of REALTORS®), reached out to help them complete their goal. GMAR has already been involved in raising funds for service dogs for several years, with their “5 Years, 5 Dogs, 5 Lives Saved” campaign, and they have previously completed sponsorship of Service Dogs Cobalt REALTOR® Blue, and Thor, and have future Service Dog Independence, currently in-training.

On Monday, August 12, 2019 the two came together, and GMAR presented a check to The Michigan State Police for $15,725 – covering the balance of the Trooper Recruit School’s sponsorship.

The funds raised and contributed will be sent to Guardian Angels Medical Service Dogs, a 501(C)(3) non-profit organization, that has raised and trained more than 320 service dogs for deserving individuals in need nationwide, predominantly for veterans and first-responders.

To date, Guardian Angels has paired more than 20 dogs in the State of Michigan. But the waiting list continues to grow. The number of both veterans and first-responders facing issues such as PTSD, Traumatic Brain Injury, Seizure and Diabetic disorders and mobility issues is steadily increasing, and it is the hope of the Michigan State Police and GMAR that this individually-trained medical service dog, yet named will greatly improve life for its future recipient.

Guardian Angels Medical Service Dogs is a 501(c) 3 based in Williston, Florida and has grown into a nation-wide Service Dog Organization. We raise, train and then donate individually trained medical service dogs to veterans, first responders and others who suffer from disabilities including PTS, Traumatic Brain Injury, mobility issues and more. Guardian Angels receives up to 40 applications each day for one of their medical Service Dogs. There is no state or federal funding available for this critical life-saving program. Over the past 6 years, Guardian Angels has paired more than 200 individually trained medical service dogs with those in need, and with your help, they can do even more.

LEGAL NOTICE AND TERMS OF USE: The content of the above press release was provided by the “news source” Guardian Angels Medical Service Dogs Inc. or authorized agency, who is solely responsible for its accuracy. Send2Press® is the originating wire service for this story and content is Copr. © Guardian Angels Medical Service Dogs Inc. with newswire version Copr. © 2019 Send2Press (a service of Neotrope). All trademarks acknowledged. Information is believed accurate, as provided by news source or authorized agency, however is not guaranteed, and you assume all risk for use of any information found herein/hereupon.