"Due to the November elections and then 'superstorm' Sandy, we got a late start in promoting the grants this year," said Neotrope CEO Christopher L. Simmons.

“Due to the November elections and then ‘superstorm’ Sandy, we got a late start in promoting the grants this year,” said Simmons, a member of ASCAP and the PRSA, and a working public relations pro since 1981. “In fact, some folks only learned about this year’s program last week, due to the time delay in newsletters and other media reporting on the program this year. We’ve gotten more applications this week than the entire month of January.”

Starting this year, the Grant has been named after the company co-founder, the late Dr. J.L. Simmons, PhD, who passed away in 2003, ten years ago. Henceforth the Neotrope PR Grants will be known as the “J.L. Simmons Non-Profit PR Grant” in his memory.

Each 2013 PR Grant recipient chosen from qualified applicants will receive free news distribution through Send2Press(R) Newswire, as well as free run-of-site advertising across the Neotrope News Network for 12 months (through March 2014); the combined value of in-kind services is approximately $4,500+ per recipient.

More information about the grants, and a simple online application, can be found at: http://prgrants.com/ . There is no entry fee, no reciprocal branding requirements or any other “shenanigans” often found with less altruistic programs.

About Neotrope:
Neotrope(R), established January 1983 in California, USA, is a family-owned small business specializing in brand identity, advertising, marketing, SEO, content development and public relations (PR). The creative team includes accredited PR pros (including PRSA members), working journalists, published authors, musicians, and other contributing talents. Neotrope was an Inc. 5000 listed company in 2009, and has an A+ rating with the BBB.

News distribution services will be provided by Send2Press(R) Newswire, a service of Neotrope. 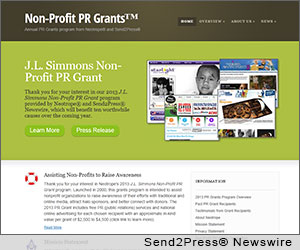 NEWS ARCHIVE NOTE: this archival news content, issued by the news source via Send2Press Newswire, was originally located in the Send2Press® 2004-2015 2.0 news platform and has been permanently converted/moved (and redirected) into our 3.0 platform. Also note the story “reads” counter (bottom of page) does not include any data prior to Oct. 30, 2016. This press release was originally published/issued: Fri, 15 Feb 2013 17:29:17 +0000

View More Advertising and Marketing News
"Due to the November elections and then 'superstorm' Sandy, we got a late start in promoting the grants this year," said Neotrope CEO Christopher L. Simmons.