LOS ANGELES, Calif., Dec. 30, 2021 (SEND2PRESS NEWSWIRE) — A popular holiday celebration dating to 16th century Mexico graced the streets of East Hollywood for the first time this year. The music and traditional costumes of Oaxaca transformed L. Ron Hubbard Way in East Hollywood in a procession that was a melding of two cultures. 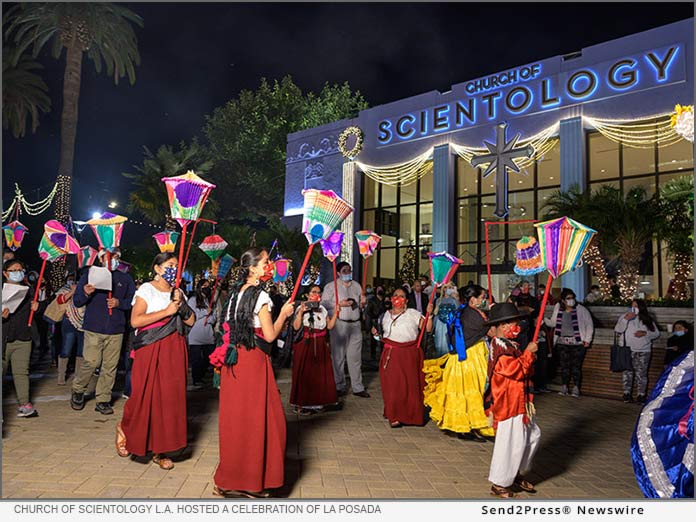 PHOTO CAPTION: The Church of Scientology Los Angeles hosted a celebration of La Posada this year, part of its commitment to honoring and preserving the unique cultures of the diverse communities of Los Angeles.

La Posada, which celebrates the journey of Mary and Joseph to Bethlehem, includes singing and dancing in a unique blend of cultures. Musicians from a Oaxacan community band led the procession. The Church of Scientology Los Angeles hosted the celebration as part of its commitment to honor and help preserve the traditions and culture of the many diverse communities that call Los Angeles home.

In the 1580s, Spanish friars adopted an Aztec winter solstice holiday that celebrates the birth of Huitzilopochtli, the god of the sun and war. They built La Posada on this tradition to convert indigenous people to Catholicism.

Posada means a lodge or inn in Spanish. Posadas are held for nine days from December 16 through December 24. Also known as “Los Peregrinos, San José y la Virgen María,” (the pilgrimage of Saint Joseph and the Virgin Mary) participants reenact the experience of Mary and Joseph seeking lodging on their trip to Bethlehem.

“I grew up in a town in Oaxaca with this music and these traditions, but I have not participated in a Posada for at least 30 years,” said one guest. “We love our traditions, and we want to share this love with Angelinos and with all in this beautiful country who have been so generous to our people.”

The Church also hosted a celebration this year of Día de los Muertos, the Day of the Dead, organized by members of the Los Angeles Quilana community of Oaxaca, Mexico. And leaders of the L.A. Oaxacan community took part in a convention in October 2021 in support of the human rights of Oaxacan and other Mexican and Central American indigenous people at the Church of Scientology of the Valley in North Hollywood.

The Church of Scientology Los Angeles is an Ideal Scientology Organization dedicated in April 2010 by Scientology ecclesiastical leader Mr. David Miscavige. The Church, featured in an episode of Inside Scientology, is configured to service Scientologists in their ascent to spiritual freedom and serve as a home for the entire community—a meeting ground of cooperative effort to uplift people of all denominations.

For more information, visit the website of Church of Scientology of Los Angeles, @ScientologyLA on Instagram or https://www.facebook.com/ScientologyLA

Photo caption: The Church of Scientology Los Angeles hosted a celebration of La Posada this year, part of its commitment to honoring and preserving the unique cultures of the diverse communities of Los Angeles.