"Major conclusions of the study were that the observable universe is probably not expanding also precluding its accelerated expansion (dark energy), and that the Hubble Distance Formula is wrong and needs to be replaced," say authors Noble and Cooper.

MONTREAL, Quebec, Canada, March 7, 2014 (SEND2PRESS NEWSWIRE) — According to the Pantheory Research Organization, a new study of type 1a supernova data has concluded, for the first time, that dark energy probably does not exist. The paper is entitled “An Alternative Universe-Scale Analytic Metrology and Related Cosmological Model.” The paper was published in the February 2014 issue of the journal of Applied Physics Research, by the Canadian Center of Science and Education.

This new research study involves “an analysis of type 1a supernovae data with newly proposed distance and brightness equations which, if valid, would eliminate the need for changing expansion rates of the universe vis-a-vis dark energy.” This conclusion was based upon researchers comparing Big Bang related Hubble formula distance calculations with alternative-cosmology derived distance and brightness equations and related calculations, concerning a present-day study of type 1a supernova observations.

The first well-accepted assumption then and now was that space is expanding, and the second assumption was that the Hubble Formula calculates distances correctly based upon a constant expansion rate of the universe. The Hubble Distance Formula was derived from the Special Theory of Relativity based upon an expanding universe. The authors of this paper say that if either or both of these assumptions were wrong, then dark energy could be an invalid hypothesis even though the Nobel Prize was granted for its discovery.

The non-standard cosmology used as the basis for deriving the alternative equations and calculations used for comparison in the study is called the “Pan Theory.”

“Major conclusions of the study were that the observable universe is probably not expanding also precluding its accelerated expansion (dark energy), and that the Hubble Distance Formula is wrong and needs to be replaced,” say the authors Forrest W. Noble and Timothy M. Cooper.

* Photo Caption: The Hubble Space Telescope has been used to find and observe many supernovae since its first use. Photograph compliments of NASA and ESA. 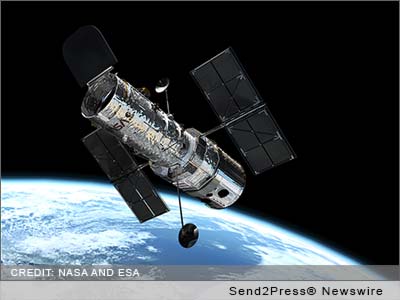 NEWS ARCHIVE NOTE: this archival news content, issued by the news source via Send2Press Newswire, was originally located in the Send2Press® 2004-2015 2.0 news platform and has been permanently converted/moved (and redirected) into our 3.0 platform. Also note the story “reads” counter (bottom of page) does not include any data prior to Oct. 30, 2016. This press release was originally published/issued: Fri, 07 Mar 2014 06:01:08 +0000

View More Books and Publishing News
"Major conclusions of the study were that the observable universe is probably not expanding also precluding its accelerated expansion (dark energy), and that the Hubble Distance Formula is wrong and needs to be replaced," say authors Noble and Cooper.

LEGAL NOTICE AND TERMS OF USE: The content of the above press release was provided by the “news source” Pantheory Research Organization or authorized agency, who is solely responsible for its accuracy. Send2Press® is the originating wire service for this story and content is Copr. © Pantheory Research Organization with newswire version Copr. © 2014 Send2Press (a service of Neotrope). All trademarks acknowledged. Information is believed accurate, as provided by news source or authorized agency, however is not guaranteed, and you assume all risk for use of any information found herein/hereupon.