Many or most of these observations were made using the Hubble Space Telescope as well as very long baseline radio telescopes, needed to observe the great distances involved.

This summary of perceived problems lists most of the well-known problems with the Big Bang model, along with some lesser known problems that also could seriously undermine the model. An example of a lesser known BB problem concerns an important observational study and modeling attempt concerning gravity.

The related paper concluded that: “we do not seem to have the correct theory of gravity.” This statement involves Newtonian and Einsteinian gravity as they relate to the Big Bang model, the dark matter hypothesis, and the contradictory observations amassed for the related study.

The Big Bang Theory problems discussed in great detail within this paper are:

This paper asserts that the listed Big Bang problems are more easily explained, or do not exist at all with the proposed alternative cosmology called the Pan Theory, which can be found on any search engine. Most of these BB problems also do not exist with most steady state models.

Even more distant observations than those in this study, to the supposed edge of the Big Bang universe in time, are expected to be observable with the new James Webb space telescope when it goes up and becomes fully functional, maybe by 2019.

If they find at that time, as expected, nothing but bright blue, young appearing galaxies, then all cosmologies proposing a much older or infinite aged universe will be in serious jeopardy of being disproved. On the other hand, if they find at the farthest distances any very large, red, or old appearing galaxies like those summarized in this paper, then the Big Bang model would likewise be in serious jeopardy of being disproved, which is expected by the authors based upon the general conclusions of the study.

The summary Conclusion of the paper is that the Big Bang model is probably the wrong model of cosmology, for reasons concerning the above and related problems, as explained within the paper.

* Image Caption: Artist’s rendering of the James Webb Space Telescope, which could likely confirm or contradict Big Bang cosmology according to the authors. (Image compliments of NASA.) 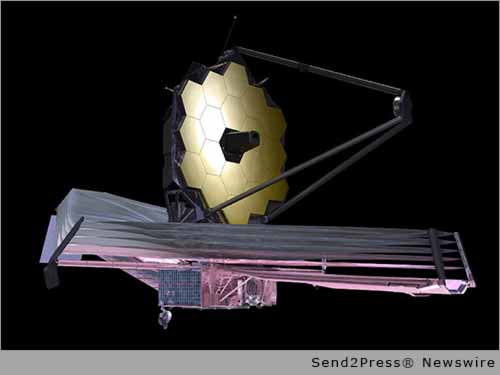 Alternate Headline: Problems with Big Bang Cosmology according to the Pantheory Research Organization

NEWS ARCHIVE NOTE: this archival news content, issued by the news source via Send2Press Newswire, was originally located in the Send2Press® 2004-2015 2.0 news platform and has been permanently converted/moved (and redirected) into our 3.0 platform. Also note the story “reads” counter (bottom of page) does not include any data prior to Oct. 30, 2016. This press release was originally published/issued: Tue, 30 Jun 2015 14:38:22 +0000

LEGAL NOTICE AND TERMS OF USE: The content of the above press release was provided by the “news source” Pantheory Research Organization or authorized agency, who is solely responsible for its accuracy. Send2Press® is the originating wire service for this story and content is Copr. © Pantheory Research Organization with newswire version Copr. © 2015 Send2Press (a service of Neotrope). All trademarks acknowledged. Information is believed accurate, as provided by news source or authorized agency, however is not guaranteed, and you assume all risk for use of any information found herein/hereupon.