CHICAGO, Ill., Nov. 18, 2019 (SEND2PRESS NEWSWIRE) — Aaron Ozee, author of notable children’s book, “Regulus” (ISBN: 9781387010790), has partnered with popularized international tourism organization, Young Pioneer Tours, bringing a printed copy of his charming narrative along with them during their expedition into the exclusion zone of the Chernobyl nuclear disaster. 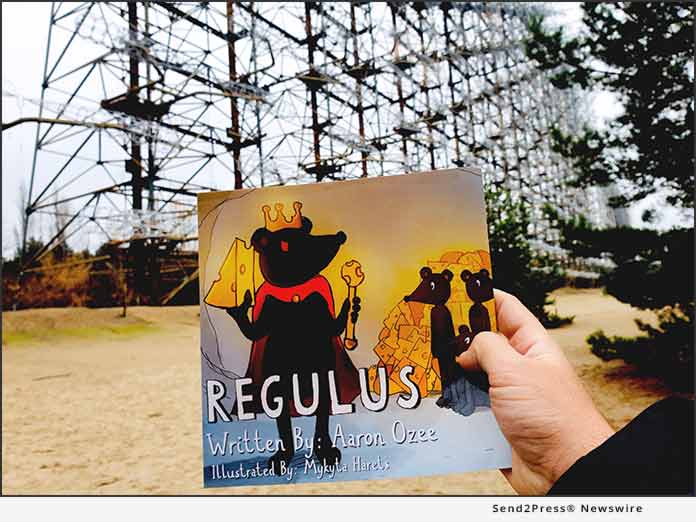 Since the critical failure of the fourth reactor in April 1986, radiation continues to spew from the ruins and will remain for an excess of 20,000 years. Despite certain areas within the exclusion zone having diminished levels of radiation, those who choose to join excursions of the apocalyptic region are restricted to finite viewing periods and must be accompanied by licensed guides with knowledge of the locale.

Beneath the control of the Soviet Union, the containment of the catastrophic event evacuated 30 kilometers (18.6 miles) within the Ivankiv Region of Northern Kiev, Ukraine and encased the City of Pripyat, which had been constructed years before, resting just 2 miles away. Being regarded as “the worst nuclear disaster this world has ever seen” by those with extensive insight of the occurrence, Chernobyl will forever amaze the curious with bewildering agitation.

Following the sending of “Regulus” into space, between the legendary Galapagos Islands, and across the snowy peaks of Mount Everest, the buzz around this memorable fable advances on.

“Crafting the lessons which make ‘Regulus’ such an engaging tale was pleasing knowing they carried the potential for changing the minds of young readers around the globe. Not only would these lessons entertain these aspirational children, but it would bring them genuine happiness in sight of the anger plaguing our society. Knowing the history behind the Chernobyl incident, the idea came to me to dispatch my inspirational creation to a place which has not been happy for a very long time,” commented Ozee during the announcement of the achievement.

Copies of “Regulus” can be purchased from https://www.aaronozee.com or mainstream shopping outlets. As for details about Young Pioneer Tours, just visit https://www.youngpioneertours.com.

View More Books and Publishing News
"Knowing the history behind the Chernobyl incident, the idea came to me to dispatch my inspirational creation to a place which has not been happy for a very long time," commented Ozee