In addition, Guarnaccia will play an undisclosed role and produce a TV Pilot of Lupi Pictures “CENTRAL PARK WEST” to start in New York July 2015 written and produced by Paul Lupi with brother Daniel Lupi (“Lincoln,” “The Master,” “There Will Be Blood,” “Catch Me If You Can,” “Boogie Nights”).

A story with extreme martial arts choreography, “KALM” is a bodyguard assigned to chauffeur a headlining exotic dancer to a desert town, when they get caught in the crossfire between warring drug lords.

Guarnaccia says: “We pulled together a roster of great actors, stunt fighters, crew, and have a distributor of this genre attached working with us and making this project successful.”

Guarnaccia’s gritty film style and performance grabbed the attention of Paul Lupi whose company Lupi Pictures is now in talks to co-produce properties in the Lightrow roster.

“KALM” the comic book is written by Ken Mora, writer/producer of the spoof of Clint Eastwood’s “Dirty Harry” films entitled “Magnum Farce.” The screenplay is written by a talented young writer Marc Guzman and boasts DGA director John Rogers on board to call the action. The production will create a distinct vision for “KALM” to be shot, principally, on a desolate stretch of road in the USA.

LightRow Pictures concurrent projects “The Next Big Hit” ( https://www.facebook.com/TheNextBigHit ) features the unique genre mash-up of martial-arts and musical comedy, and the movie “Tinker and Snatch” another comic book and live martial arts action feature film is on the first row. 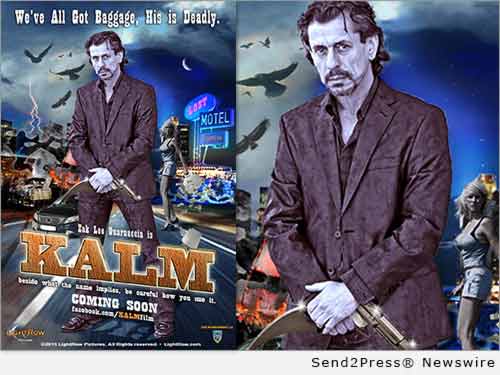 NEWS ARCHIVE NOTE: this archival news content, issued by the news source via Send2Press Newswire, was originally located in the Send2Press® 2004-2015 2.0 news platform and has been permanently converted/moved (and redirected) into our 3.0 platform. Also note the story “reads” counter (bottom of page) does not include any data prior to Oct. 30, 2016. This press release was originally published/issued: Thu, 09 Jul 2015 15:37:46 +0000

LEGAL NOTICE AND TERMS OF USE: The content of the above press release was provided by the “news source” LightRow Pictures or authorized agency, who is solely responsible for its accuracy. Send2Press® is the originating wire service for this story and content is Copr. © LightRow Pictures with newswire version Copr. © 2015 Send2Press (a service of Neotrope). All trademarks acknowledged. Information is believed accurate, as provided by news source or authorized agency, however is not guaranteed, and you assume all risk for use of any information found herein/hereupon.