SILVER SPRING, Md., March 30, 2021 (SEND2PRESS NEWSWIRE) — The Board of Directors (BOD) of the American College of Nurse-Midwives (ACNM) is committed to creating a future that prioritizes diversity, equity, and inclusion and supports the continuing process to become an anti-racist organization. As part of this process, the BOD tasked the ACNM Ethics Committee to develop a resolution on truth and reconciliation and make recommendations to the BOD for next steps in the process. The Ethics Committee convened a Truth & Reconciliation Task Force (T&R TF) to meet this charge. 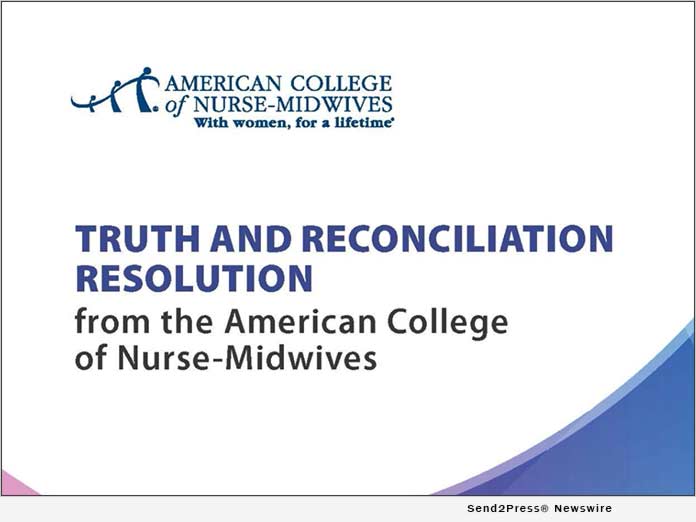 The Truth and Reconciliation Resolution document developed by the BOD is based upon the extensive information and recommendations submitted to the BOD by the T&R TF. The document can be found at https://www.midwife.org/truth-and-reconciliation.

The BOD of ACNM would like to sincerely apologize for the systemic racism that has existed and continued in our organization since it incorporated in 1954. We recognize that the BOD, through many presidencies and CEOs, perpetuated actions that were racist, exclusive, discriminatory, and harmful to individual members of ACNM. Systemic racism is among the greatest long-term threats to our nation, the profession of midwifery, and the people we serve. For ACNM to be an organization to which everyone can feel they belong and can thrive, the BOD and our organization must hold ourselves accountable for our contributions to systemic racism.

Speaking the truth on our history and the harm caused by it through ACNM’s denial, gaslighting, censorship, and exclusion is the first step in long-overdue restorative measures for our community of Black, Indigenous, and people of color (BIPOC), allowing us to promote inclusion, belonging, and a safe space for all midwives. For these reasons, ACNM is issuing its Truth and Reconciliation Resolution that acknowledges the harms caused by its previous actions and establishes a set of resolutions in response.

ACNM acknowledges that it can no longer continue to attribute the white washing of midwifery to a lack of qualifications or interest by Black and Indigenous people. This fails to acknowledge that white supremacy acted as suppressor, then law enforcer and “teacher”, then eliminator and replacer of Black and Indigenous traditional midwives with white midwives.

ACNM leadership acknowledges and apologizes for past and present harms to BIPOC midwives and the organization’s role in perpetuating and maintaining systemic racism in midwifery and healthcare. Historical facts clearly illustrate that the exclusion of Black and Indigenous midwives was intentional and by design, with the resulting whiteness of the profession of midwifery as the intended outcome. Unless efforts at inclusion are explicit, tailored, continuous, and well resourced, the result is exclusion. In the coming months, the BOD and ACNM is undertaking a full audit of actions and history and making changes to web pages, documents, and processes to ensure they are anti-racist and inclusive.

With over 6,500 members, ACNM is the professional association that represents certified nurse-midwives (CNMs) and certified midwives (CMs) in the United States. ACNM promotes excellence in midwifery education, clinical practice, and research. With roots dating to 1929, our members are primary care providers for women throughout the lifespan, with a special emphasis on pregnancy, childbirth, and gynecologic and reproductive health. ACNM provides research, administers, and promotes continuing education programs, establishes education and clinical practice standards, and creates liaisons with state and federal agencies and members of Congress to increase the visibility and recognition of midwifery care. Learn more at https://www.midwife.org/.

More from American College of Nurse-Midwives

ABOUT THE NEWS SOURCE:
American College of Nurse-Midwives

With over 6,500 members, ACNM is the professional association that represents certified nurse-midwives (CNMs) and certified midwives (CMs) in the United States. ACNM promotes excellence in midwifery education, clinical practice, and research. With roots dating to 1929, our members are primary care providers for women throughout the lifespan, with a special emphasis on pregnancy, childbirth, and gynecologic and reproductive health.

LEGAL NOTICE AND TERMS OF USE: The content of the above press release was provided by the “news source” American College of Nurse-Midwives or authorized agency, who is solely responsible for its accuracy. Send2Press® is the originating wire service for this story and content is Copr. © American College of Nurse-Midwives with newswire version Copr. © 2021 Send2Press (a service of Neotrope). All trademarks acknowledged. Information is believed accurate, as provided by news source or authorized agency, however is not guaranteed, and you assume all risk for use of any information found herein/hereupon.