"I am grateful for the actions of President Obama and the many supporters across the country who gave a voice to our children through advocating for this important law," explains Lorri Caffrey, of the SUDC Foundation, whose daughter Jenna passed away at the age of 16 months.

WASHINGTON, D.C., Dec. 18, 2014 (SEND2PRESS NEWSWIRE) — The SUDC Foundation celebrates the legislation signed into law today by President Obama which is deeply personal to all those who have lost a child to Stillbirth, Sudden Infant Death or Sudden Unexplained Death in Childhood (SUDC). “This is the best Christmas gift ever,” said Laura Crandall to President Obama at the bill signing today in the White House.

Laura Crandall, Executive Director of the SUDC Foundation who lost her 15 month old daughter to a sudden unexplained death adds, “It has taken more than six years of advocacy efforts to finally see this day arrive. It was a privilege to give a voice to our children and to represent families touched by SUDC, Stillbirth and Sudden Unexplained Infant Death.”

S.2746/H.R.669 was first introduced in Congress in 2009, by the late Senator Frank Lautenberg (NJ-D) in the Senate and Congressman Frank Pallone (NJ-D) in the House. In its third legislation session attempt, the bill finally saw movement with a hearing in the House’s E&C subcommittee on health, in November 2013, which paved the way for full committee support and passage by the full House on September 9, 2014. In parallel, new Senate champions, Senator Brown (D-OH) and Senator Ayotte (NH-R), introduced Senate version S.2746.

The bill was approved by the Senate HELP Committee with amendments and saw successful passage by the full Senate on November 20, 2014. A final unanimous vote to pass the Senate-revised bill was made by the House on December 3, 2014, which led to it being forwarded to the President.

“As a parent I am overwhelmed with the events of today. The passage of this bill will bring us one step closer to finding a reason why Alex and so many other precious children died,” said Danna Richardson mother to Alexandra who passed away in 2006 just shy of her second birthday. She continues, “Up until now there have been no consistent protocols or procedures in place when a child dies unexpectedly and suddenly. Inevitably, the more consistent and robust information we gather the greater chance we have in preventing future families from having to experience such a devastating loss.”

The Sudden Unexpected Death Data Enhancement and Awareness Act (S.2746/H.R.669) amends the Public Health Service Act to help enhance awareness about unexpected sudden death in early life. The legislation provides for consistent data collection related to stillbirths and sudden, unexpected deaths in both infants and children. By better understanding the causes of unexpected sudden death, we can do more to improve the health of all infants and children.

Tim and Kathleen Doyle, whose vibrant son Thomas passed away at the age of eight years, state, “While the pain of losing our son never goes away, we are hopeful that this new law will ease some of the burdens of families who experienced such a traumatic loss. We know that this will help forward research and advocacy for an important issue.”

Every year, approximately 30,000 families in the U.S. are affected by Stillbirth, Sudden Unexpected Infant Death or Sudden Unexplained Death in Childhood (SUDC). SUDC is defined as the sudden death of a child greater than 1 year of age that remains unexplained after a thorough case investigation, including performance of a complete autopsy, examination of the death scene, and review of the child’s medical history (Krous 2005).

“I am grateful for the actions of President Obama and the many supporters across the country who gave a voice to our children through advocating for this important law,” explains Lorri Caffrey, of the SUDC Foundation, whose daughter Jenna passed away at the age of 16 months. She goes on to say, “At a time of year when bereaved parents have such heavy hearts, I am inspired to know that our efforts are truly making a difference for the future of all children.” 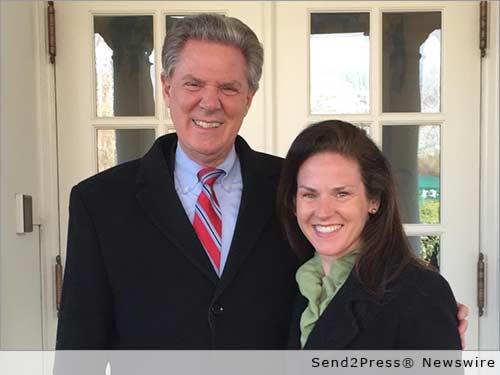 NEWS ARCHIVE NOTE: this archival news content, issued by the news source via Send2Press Newswire, was originally located in the Send2Press® 2004-2015 2.0 news platform and has been permanently converted/moved (and redirected) into our 3.0 platform. Also note the story “reads” counter (bottom of page) does not include any data prior to Oct. 30, 2016. This press release was originally published/issued: Thu, 18 Dec 2014 17:56:18 +0000

View More Ballots Bills and Laws News
"I am grateful for the actions of President Obama and the many supporters across the country who gave a voice to our children through advocating for this important law," explains Lorri Caffrey, of the SUDC Foundation, whose daughter Jenna passed away at the age of 16 months.

LEGAL NOTICE AND TERMS OF USE: The content of the above press release was provided by the “news source” SUDC Foundation or authorized agency, who is solely responsible for its accuracy. Send2Press® is the originating wire service for this story and content is Copr. © SUDC Foundation with newswire version Copr. © 2014 Send2Press (a service of Neotrope). All trademarks acknowledged. Information is believed accurate, as provided by news source or authorized agency, however is not guaranteed, and you assume all risk for use of any information found herein/hereupon.