FAIRFAX, Va., Feb. 11, 2021 (SEND2PRESS NEWSWIRE) — Blue Glacier Security & Intelligence LLC announced it has published a thought-provoking report on the bombing in Nashville, Tennessee that occurred on December 25, 2020. The security risk analysis includes a discussion on the perpetrator (Anthony Warner), the bomb’s effects and impacts on the AT&T network hub and beyond, physical vulnerabilities of critical infrastructure, threat outlook and a red team alternate scenario. 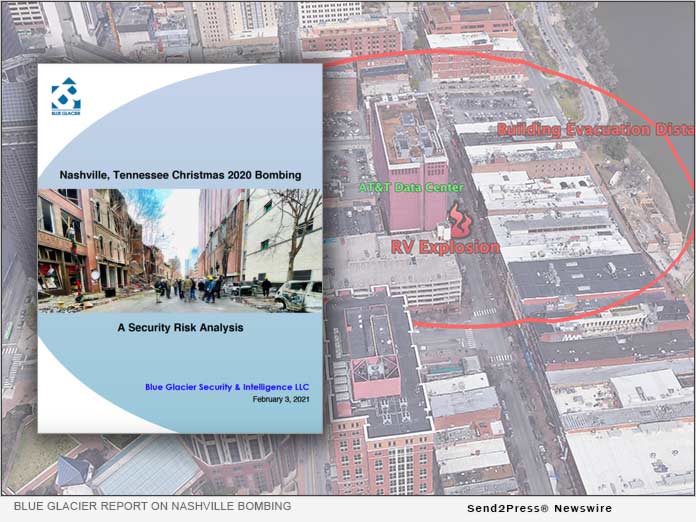 The 17-page report is based entirely on Blue Glacier’s security risk management expertise and publicly available information. Roughly 100 sources were used to write the report.

A few of the report’s key judgements:

* Anthony Warner’s attack likely does not qualify as terrorism, as there is currently no publicly known evidence of Warner’s desire to intimidate or coerce a civilian population or government.

* Starting at least 16 months prior to the attack, Warner likely displayed at least four warning behaviors related to violence risk.

“We were most surprised by warning behaviors Anthony Warner exhibited prior to his attack,” notes K. Campbell, a principal at Blue Glacier. “Our analysis also lays bare that a lone offender with explosives can cause widespread, regional disruption. U.S. critical infrastructure is more vulnerable than many people realize.”

View More Telecom and VoIP News
"Our analysis also lays bare that a lone offender with explosives can cause widespread, regional disruption. U.S. critical infrastructure is more vulnerable than many people realize," notes K. Campbell, a principal at Blue Glacier.

ABOUT THE NEWS SOURCE:
Blue Glacier Security and Intelligence LLC

LEGAL NOTICE AND TERMS OF USE: The content of the above press release was provided by the “news source” Blue Glacier Security and Intelligence LLC or authorized agency, who is solely responsible for its accuracy. Send2Press® is the originating wire service for this story and content is Copr. © Blue Glacier Security and Intelligence LLC with newswire version Copr. © 2021 Send2Press (a service of Neotrope). All trademarks acknowledged. Information is believed accurate, as provided by news source or authorized agency, however is not guaranteed, and you assume all risk for use of any information found herein/hereupon.