'Behind the Lines' tells the true story of one of America's finest hours that few Americans have heard.

DENVER, Colo., April 13, 2015 (SEND2PRESS NEWSWIRE) — “Most new print books die an anonymous death,” says Milbrown Press publisher and author, Jeffrey B. Miller. “That’s not surprising when reportedly more than 600,000 new print books are released every year. But ‘Behind the Lines’ (ISBN: 978-0990689300) has beaten those obscurity odds.”

Recognitions for “Behind the Lines: WWI’s little-known story of German occupation, Belgian resistance, and the band of Yanks who helped save millions from starvation” include: Kirkus Reviews’ Best Books of 2014 (Indie) and a Kirkus Starred Review; history finalist in Foreword Reviews’ INDIEFAB Book of the Year Awards (winners June 26); finalist in the 67th Colorado Authors League Awards (winners May 8); and positive reviews from Publishers Weekly, Foreword magazine, Denver Post, and Westword. Miller has also been a guest on Sirius radio’s talk show, “Get it Right with Margaret Hoover.”

“Behind the Lines” tells the story of one of the largest food relief efforts the world has ever seen, and one of America’s finest hours that few Americans know about. During World War I, the Commission for Relief in Belgium (CRB) fed every day for four years more than 9 million Belgians and northern French who were trapped behind German lines.

The British insisted neutral American observers, or CRB “delegates,” be allowed into German occupied Belgium to supervise the shipments and guarantee the Germans didn’t take the food. The first CRB delegates were young Rhodes scholars on Christmas break from Oxford University and had to maintain strict neutrality as they watched the Belgians suffer under the harsh totalitarian rule.

Ultimately, the CRB changed the way Americans saw themselves and how the world saw America.

“Behind the Lines” is a nonfiction history written for general readers. It follows a handful of CRB delegates, a 22-year-old Belgian woman, two U.S. diplomats, the head of the CRB, and two Belgians – a businessman and a priest – who team up to fight the German occupation. 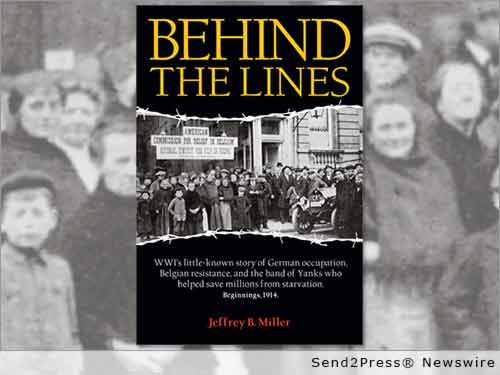 Original Keywords: Behind the Lines: WWI’s little-known story of German occupation, Belgian resistance, and the band of Yanks who helped save millions from starvation, ISBN 978-0990689300, INDIEFAB Book of the Year Awards Milbrown Press Jeffrey B. Miller. That’s not surprising when reportedly more than 600 a nonfiction history written for general readers Colorado

NEWS ARCHIVE NOTE: this archival news content, issued by the news source via Send2Press Newswire, was originally located in the Send2Press® 2004-2015 2.0 news platform and has been permanently converted/moved (and redirected) into our 3.0 platform. Also note the story “reads” counter (bottom of page) does not include any data prior to Oct. 30, 2016. This press release was originally published/issued: Mon, 13 Apr 2015 06:01:09 +0000

View More Books and Publishing News
'Behind the Lines' tells the true story of one of America's finest hours that few Americans have heard.

LEGAL NOTICE AND TERMS OF USE: The content of the above press release was provided by the “news source” Milbrown Press or authorized agency, who is solely responsible for its accuracy. Send2Press® is the originating wire service for this story and content is Copr. © Milbrown Press with newswire version Copr. © 2015 Send2Press (a service of Neotrope). All trademarks acknowledged. Information is believed accurate, as provided by news source or authorized agency, however is not guaranteed, and you assume all risk for use of any information found herein/hereupon.

REFERENCES: Books and Publishing News, Behind the Lines: WWI's little-known story of German occupation, Belgian resistance, and the band of Yanks who helped save millions from starvation, ISBN 978-0990689300, INDIEFAB Book of the Year Awards Milbrown Press Jeffrey B. Miller. That's not surprising when reportedly more than 600 a nonfiction history written for general readers Colorado | ID:18754