Bullying Prevention Month: Tackling Bullying is a Matter of Life and Death

LOS ANGELES, Calif., Oct. 21, 2021 (SEND2PRESS NEWSWIRE) — Bullying is a serious, often life-threatening issue. For Bullying Prevention Month, the Church of Scientology International shares the story of a humanitarian who found a simple way to change the culture of bullying to one of compassion. 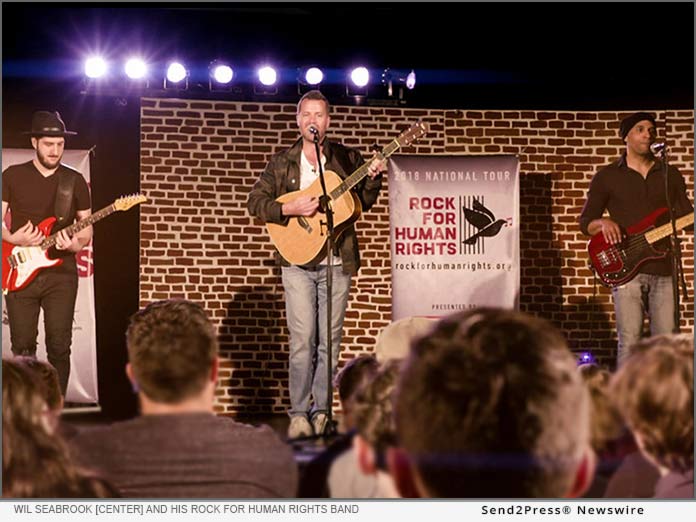 PHOTO CAPTION: Wil Seabrook (center) and his Rock for Human Rights band traveled across the U.S. on the “30 Days–30 Right” concert tour.

When a rock and roll band called Rock for Human Rights (R4HR) launched its “30 Days–30 Rights” human rights school concert tour across America, they were hoping to create an impact. But they didn’t expect they’d be saving lives.

R4HR founder and lead singer Wil Seabrook’s idea for the tour was to help youth make a personal connection with the Universal Declaration of Human Rights which lists out 30 rights everyone has by virtue of being human. They would use the booklets and videos of Youth for Human Rights International.

But the number one question on everyone’s mind was “Why would a fifth-grader in Iowa care about human rights around the world? How do you make this subject real to that kid, and why should they care?”

Seabrook found the answer to that question at one of their first school concerts. In an auditorium filled with kids, he said, “Raise your hand if anybody’s ever tried to bully you in your life.” Immediately, almost every hand in the audience shot up.

“I’ve been fortunate enough to perform for tens of thousands of young people all over the world, sharing the vitally important information contained in the Youth For Human Rights materials,” says Seabrook. “Everywhere I go and no matter the age of the audience, I’ve found that bullying is a universal problem.”

This is all the more staggering when viewed through the lens of a CDC study that found suicide is the second leading cause of death among American youths age 14–18. What’s more, a 2014 study found “a strong association” between bullying and suicide thoughts and attempts.

“Rock For Human Rights teaches young people that they have more power than they realize and that human rights begins in places closest to home,” says Seabrook. “For students, this means the school environment they themselves create for each other. We receive success stories constantly after our performances from students saying they’re going to take more personal responsibility for creating a safe and uplifting environment for their peers. The simple, powerful information in these booklets and video PSAs changes lives daily, and is a much-needed tool in the effort to end the bullying epidemic.”

The Church’s support is inspired by Scientology Founder L. Ron Hubbard’s conviction that “It is vital that all thinking men urge upon their governments sweeping reforms in the field of human rights.”

Photo caption: Wil Seabrook (center) and his Rock for Human Rights band traveled across the U.S. on the “30 Days–30 Right” concert tour.

View More Music and Recording News
"I've been fortunate enough to perform for tens of thousands of young people all over the world, sharing the vitally important information contained in the Youth For Human Rights materials," says Seabrook.