Celebrating L. Ron Hubbard’s Birthday and the 70th Anniversary of the Scientology Religion 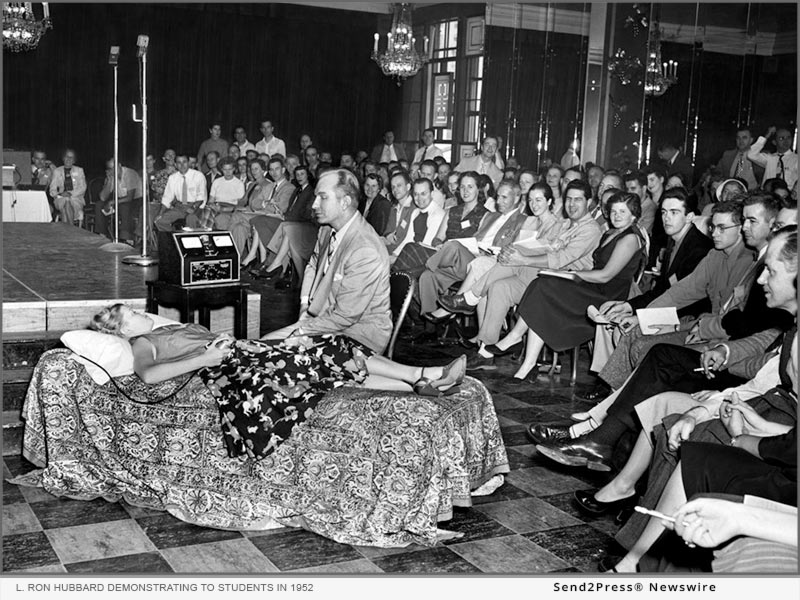 PHOTO CAPTION: L. Ron Hubbard demonstrating his discoveries on the mind, spirit and life to students in 1952.

This year marks the 70th anniversary of Scientology, the world’s youngest major religion, adding another dimension to the celebration.

Ron Hubbard once remarked that there are only two tests of a life well lived: “Did he do what he intended?” and “Were people glad he lived?”

He also believed that “wisdom is meant for anyone who wishes to reach for it. It is the servant of the commoner and king alike and should never be regarded with awe.”

He shared the knowledge he discovered, recording his research in more than 10,000 authored works and the 3,000 recorded lectures of Dianetics and Scientology.

And while Scientologists the world over honor his legacy with celebrations in Scientology Churches and Missions, many millions more recognize him for the humanitarian initiatives derived from his work.

Ron Hubbard’s common-sense moral code, The Way to Happiness, transformed a poverty-stricken African village. That same booklet helped forge peace between warring gangs in the streets of South Central Los Angeles. And it has reduced recidivism among the most hardened criminalsthroughout Mexico.

Teachers in Nigeria remember L. Ron Hubbard for the technology of study that has given them the tools to salvage entire generations.

And officials, religious leaders and entire towns and cities across South Africa know him as the man who inspired the Scientology Volunteer Ministers who have empowered a movement throughout the country with Scientology Tools for Life training.

Ron Hubbard earned the Publishers Weekly Century Award for the book Dianetics: The Modern Science of Mental Health. The magazine describes it as “perhaps the best-selling non-Christian book of all time in the West.”

Smithsonian magazine lists L. Ron Hubbard among the 11 most influential religious figures in American history and one of the 100 most significant Americans of all time.

To learn more about L. Ron Hubbard and the religion he founded, visit the Scientology Network.

Several of L. Ron Hubbard’s books on film are available:

The Problems of Work: Scientology Applied to the Workaday World, The Way to Happiness, and Scientology: The Fundamentals of Thought.

And the series L. Ron Hubbard Library Presents includes filmed versions of some of his most popular essays and articles including “My Philosophy,” “What is Greatness?” and “The Aims of Scientology.”

Since launching with a special episode featuring Scientology ecclesiastical leader Mr. David Miscavige, the Scientology Network has been viewed in 240 countries and territories worldwide in 17 languages.

Broadcast from Scientology Media Productions, the Church’s global media center in Los Angeles, the Scientology Network is available on DIRECTV Channel 320 and can be streamed on Scientology.tv, on mobile apps, and via the Roku, Amazon Fire and Apple TV platforms.

Caption: L. Ron Hubbard demonstrating his discoveries on the mind, spirit and life to students in 1952