China Rescue Dogs, A Non-Profit Organization, Leads Fight to Save Dogs from Chinese Meat Trade in the face of CDC Import Ban

VASS, N.C., Dec. 30, 2021 (SEND2PRESS NEWSWIRE) — China Rescue Dogs, a leading American 501(c)(3) non-profit dog rescue, has been recognized for its efforts to save dogs from the Chinese meat trade. Over the past year, China Rescue Dogs has been rescuing and rehabilitating dogs from China and providing them with loving homes in the United States and Canada. 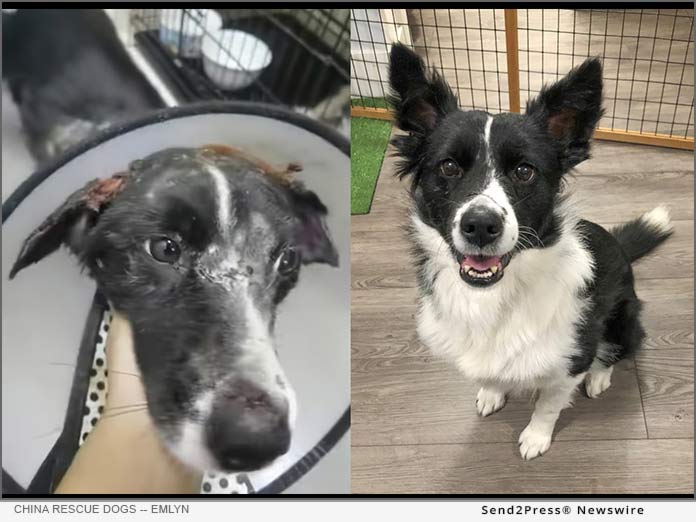 PHOTO CAPTION: Before and after pictures of Emlyn. On the left, after she was found by our rescuer in China suffering from acid burns over a large part of her body. On the right, a recent picture of how spoiled, loved, and happy she is in her new forever home in Canada.

“Working with trusted rescues and shelters in China, our mission is to remove the dogs from imminent harm, treat the physical and psychological injuries from severe abuse and neglect, and socialize the dogs so that they can be integrated into loving family environments,” remarked Jill Stewart, President, and Founder of China Rescue Dogs. “We also shine a light on the dog meat trade in China and other countries and, thereby, encourage others to advocate for the end of the dog meat trade and speak up for those who have no voice.”

China Rescue Dogs’ efforts were recently hampered by a Centers for Disease Control and Prevention import ban, which effectively halted the imports of all dogs from 113 countries, including China. Issued without input from dog rescue groups, the ban has hurt the missions of international non-profit rescues, including the dogs they serve and forced dogs recused from China to be redirected to Canada. This has had a chilling effect on tens of thousands of animals, which only continues to grow as the ban remains in effect.

“Since the import ban, our rescue is among many others that have had to find a new normal,” remarked Jill. “Our choices were limited and grim, but China Rescue Dogs has remained committed to saving dogs from China regardless of how we got it done. While rerouting dogs to Canada is the logical choice, costs have been exuberant,” she added.

The growing international cargo crisis has tripled the cost of transporting dogs on cargo airplanes, which has increased China Rescue Dogs’ reliance on donations from the international community. Without community support, funding shortages require organizations to make difficult choices and leave some dogs behind.

“Our shelters in China are reaching their maximum capacity, which means we will not be able to move the dogs out of China which will lead to the brutal slaughter of helpless dogs. Moreover, with the Yulin Dog Meat Festival beginning June 21st and CDC ban still in place, tens of thousands of dogs will be slaughtered. Thinking about this is gut-wrenching,” said Jill. 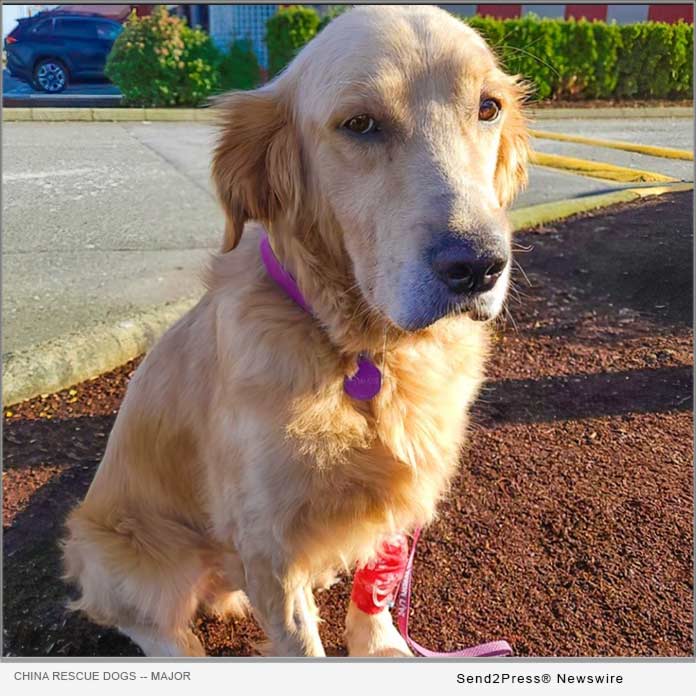 PHOTO CAPTION: This is Major. Because of his kindness and natural intuition, he will soon be a service dog for his new Mom in Canada who suffers from kidney failure.

Canada is providing immense support to this mission by opening its borders and assisting us in finding homes for these dogs. They support the organization and other U.S. rescue groups until the CDC ban is lifted or another resolution is found. “After I looked into the eyes of our dogs in China shelters, that is when we decided to reach out to our Canadian friends. Fortunately for the dogs and us, our rescue has been received with welcoming kindness,” said Jill.

The past two years have been challenging for everyone around the globe. The world has seen pandemic challenges no one could have predicted. U.S. International dog rescue nonprofits have experienced extreme obstacles in carrying out their missions within the past six months.

“What these past six months have personally taught is never to give up! Although we have had to deal with many obstacles, our dogs are being saved – thanks to our Canadian friends and neighbors. For that, we will always be grateful.” Jill added. “I have strong faith in our mission, and I know we will continue to find ways to rescue these dogs. The path may be rocky at times, but it is worth the journey. For us, it was and is the least we can do for our China rescue dogs.”

The passion for rescuing dogs from the slaughterhouses and finding them loving forever homes in North America, where they can live out the rest of their lives without fear, remains steadfast.

China Rescue Dogs is a 501(c)(3) organization founded by Jill Stewart, an ardent advocate of animal rights worldwide, and especially in China. Their global mission is to rescue and rehabilitate dogs from China and provide them with loving forever homes in North America. There are over a dozen other U.S. dog rescue organizations that are working with China Rescue Dogs on these rescues.

*Caption: Before and after pictures of Emlyn. On the left, after she was found by our rescuer in China suffering from acid burns over a large part of her body. On the right, a recent picture of how spoiled, loved, and happy she is in her new forever home in Canada.

*Caption: This is Major. Because of his kindness and natural intuition, he will soon be a service dog for his new Mom in Canada who suffers from kidney failure.

View More Pets and Veterinary News
Says founder Jill Stewart, "Our choices were limited and grim, but China Rescue Dogs has remained committed to saving dogs from China regardless of how we got it done."

LEGAL NOTICE AND TERMS OF USE: The content of the above press release was provided by the “news source” China Rescue Dogs or authorized agency, who is solely responsible for its accuracy. Send2Press® is the originating wire service for this story and content is Copr. © China Rescue Dogs with newswire version Copr. © 2021 Send2Press (a service of Neotrope). All trademarks acknowledged. Information is believed accurate, as provided by news source or authorized agency, however is not guaranteed, and you assume all risk for use of any information found herein/hereupon.